Malignant mesothelioma cells can secrete tiny vesicles containing a variety of proteins that educate the tumor microenvironment and lead to disease progression. In a recent study published in Scientific Reports, researchers identified the proteins that are commonly secreted inside these vesicles, which are called exosomes.

Patients with malignant mesothelioma (MM) are often identified at an advanced stage in part because the disease is difficult to diagnose, two points that lead to poor outcomes. Researchers believe that improved surveillance and early disease detection with MM-specific markers may improve clinical intervention and patients’ survival.

To date, several blood-based biomarkers have been studied for the diagnosis of MM, but they have limited specificity, and require validation with other diagnostic methods.

Researchers led by David W. Greening studied the exosomes secreted by the tumor cells. These nano-vesicles contain a specific composition of proteins, lipids, mRNA, and DNA cargo components that may influence changes in surrounding cells, inducing cancer progression. In addition, exosomes from specific cells have already been used as vaccines, immune therapy, or drug delivery, which make them a valuable therapeutic tool.

But to use exosomes as diagnostic or therapeutic tools, it is crucial to understand which molecules compose them, and how they affect the surrounding cells. In this study, the researchers focused particularly on how the exosomes affected tumor-associated fibroblasts and endothelial cells (the cells that make up the blood vessels), two major components of the tumor microenvironment.

They analyzed the protein composition of the exosomes derived from several human MM cancer cell models. Results showed that there were 570 proteins common to the exosomes of all MM models, a signature the researchers called mEXOS.

“The oncogenic signature (mEXOS), represents an extensive and important catalogue of proteins attributed in exosomes specifically in the context of human MM and may represent new selective extracellular and circulating targets in MM progression, diagnosis, and monitoring,” the researchers wrote.

Further analysis revealed that while some proteins of the mEXOs signature influenced the signaling pathways within the tumor cells, others were responsible for promoting the migration of both fibroblasts and endothelial cells, which resulted in an increased number of blood vessels. Also, other components of mEXOS could regulate the immune system during cancer progression, inducing the inflammatory state characteristic of the disease.

“Analysis of exosomes secreted by MM tumour cells has revealed a large number of candidate and clinically-relevant extracellular molecules in the regulation of tumour progression, migration, cell transformation, metastasis and in immunoregulation,” the researchers wrote. “This information could represent potential specific diagnostic targets for factors of MM origin.” 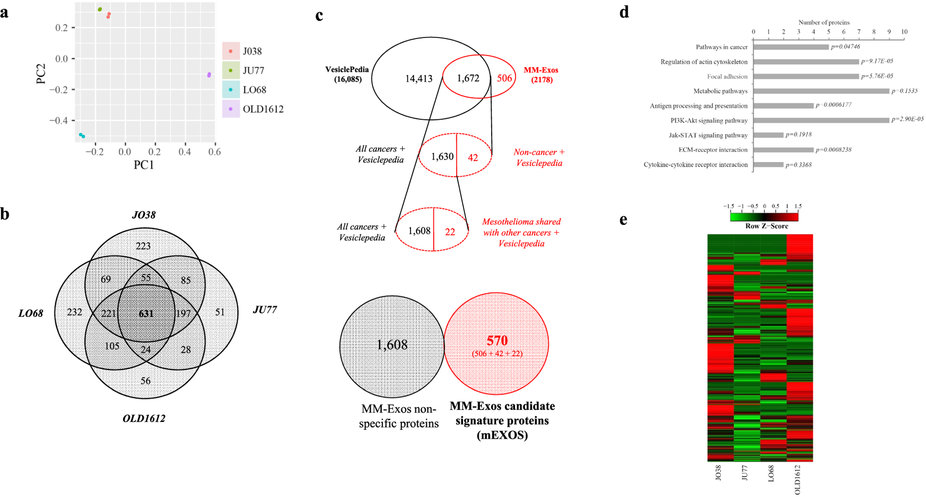 (a) Principal component analysis (PCA). Each symbol represents a biological replicate, and the colour represents the group (model). (b) A four-way Venn diagram of proteins distributed between each MM-derived exosome type is shown, revealing 631 proteins common to each dataset. (c) To determine the classification of proteins in mEXOS we applied a stringent filtering criteria. The total MM-derived exosomal proteins (2,178) were compared with the Vesiclepedia database (comprising 16,085 human entries) and literature searching, of which 506 were unique to this study and not previously reported in the context of extracellular vesicles. Among the 1,672 co-identified proteins, 42 were non-cancer proteins reported in Vesiclepedia. with a further 22 proteins reported shared with mesothelioma and other cancers in Vesiclepedia. Therefore, to determine the unique MM exosome protein signature (mEXOS), we summated the 506, 42, and 22 proteins from these categories to reveal 570 proteins as select exosomal and MM-derived components. (d) KEGG pathway analysis of mEXOS, with p-values indicated. (e) Correlation matrix of mEXOS, representing differential abundance based on normalised spectral count (SpC) values between each of the MM models investigated, showing that each individual sample represents clear distribution and similarity with other MM models. 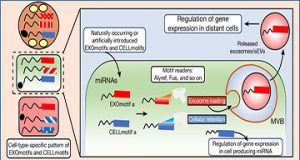