Researchers from the Imperial College London non-covalently functionalised a graphene field-effect transistor (gFET) with 1-pyrenebutyric acid N-hydroxysuccinimide ester and conjugated with anti-CD63 antibodies for the label-free detection of exosomes. Using a microfluidic channel, part of a graphene film was exposed to solution. The change in electrical properties of the exposed graphene created an additional minimum alongside the original Dirac point in the drain-source current (Ids) – back-gate voltage (Vg) curve. When phosphate buffered saline (PBS) was present in the channel, the additional minimum was present at a Vg lower than the original Dirac point and shifted with time when exosomes were introduced into the channel. This shift of the minimum from the PBS reference point reached saturation after 30 minutes and was observed for multiple exosome concentrations. Upon conjugation with an isotype control, sensor response to the highest concentration of exosomes was negligible in comparison to that with anti-CD63 antibody, indicating that the functionalised gFET can specifically detect exosomes at least down to 0.1 μg/mL and is sensitive to concentration. Such a gFET biosensor has not been used before for exosome sensing and could be an effective tool for the liquid-biopsy detection of exosomes as biomarkers for early-stage identification of diseases such as cancer. 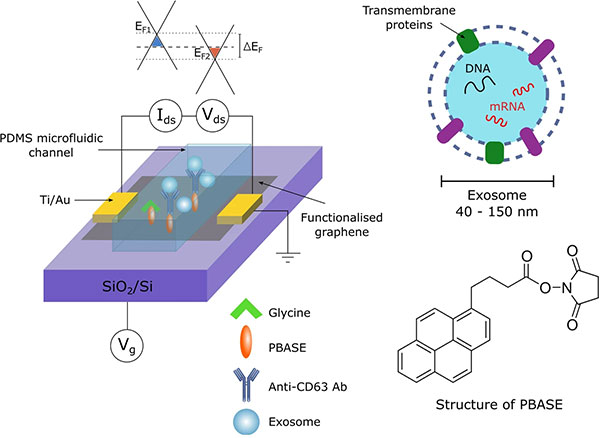 Schematic of the functionalised biosensor with microfluidic integration, showing the different doping levels of the covered and uncovered graphene as a result of exosome binding. Schematic of the basic structure of an exosome and molecular structure of 1-pyrenebutyric acid N-hydroxysuccinimide ester (PBASE).