Uterine aspirates are used in the diagnostic process of endometrial disorders, yet further applications could emerge if its complex milieu was simplified. Exosome-like vesicles isolated from uterine aspirates could become an attractive source of biomarkers, but there is a need to standardize isolation protocols. The objective of the study was to determine whether exosome-like vesicles exist in the fluid fraction of uterine aspirates and to compare protocols for their isolation, characterization, and analysis.

Researchers at the Autonomous University of Barcelona collected uterine aspirates from 39 pre-menopausal women suffering from benign gynecological diseases. The fluid fraction of 27 of those aspirates were pooled and split into equal volumes to evaluate three differential centrifugation-based procedures: (1) a standard protocol, (2) a filtration protocol, and (3) a sucrose cushion protocol. Characterization of isolated vesicles was assessed by electron microscopy, nanoparticle tracking analysis and immunoblot. Specifically for RNA material, the researchers evaluated the effect of sonication and RNase A treatment at different steps of the protocol. They finally confirmed the efficiency of the selected methods in non-pooled samples.

All protocols were useful to isolate exosome-like vesicles. However, the Standard procedure was the best performing protocol to isolate exosome-like vesicles from uterine aspirates: nanoparticle tracking analysis revealed a higher concentration of vesicles with a mode of 135 ± 5 nm, and immunoblot showed a higher expression of exosome-related markers (CD9, CD63, and CD81) thus verifying an enrichment in this type of vesicles. RNA contained in exosome-like vesicles was successfully extracted with no sonication treatment and exogenous nucleic acids digestion with RNaseA, allowing the analysis of the specific inner cargo by Real-Time qPCR. 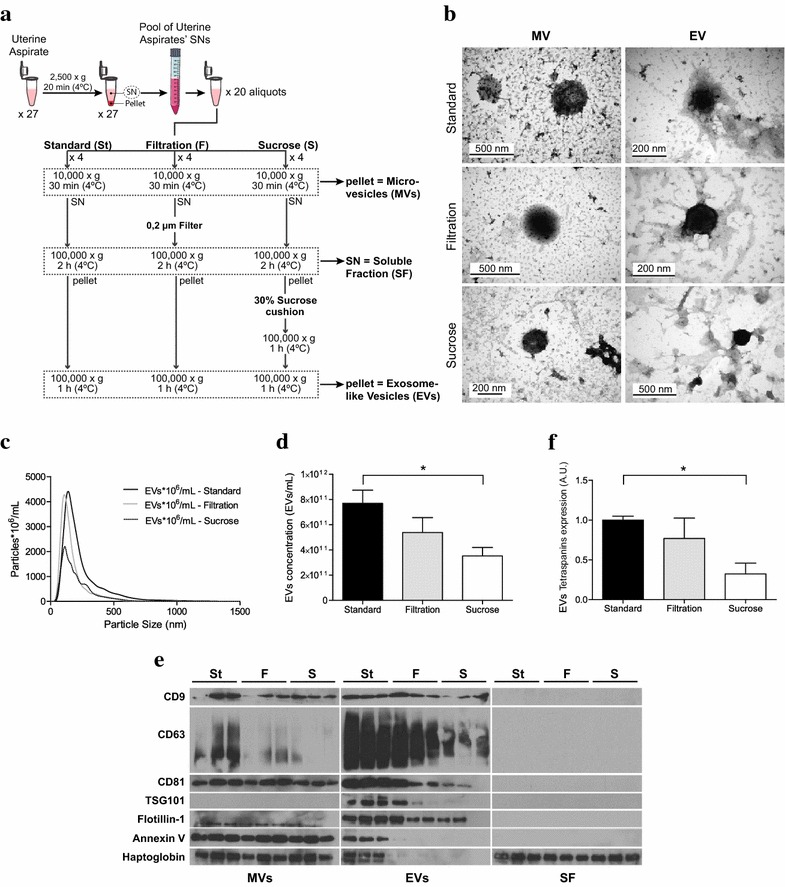 a Schematic representation of the three protocols of EVs isolation, namely Standard (St), Filtration (F), and Sucrose (S) protocols. b Electron microscopy images of negatively stained EVs and MVs. c Size distribution of isolated EVs measured by NTA. d EVs concentration measured by NTA. e Immunoblot of isolated MVs, EVs and SF proteins (done in triplicates) against EVs/MVs markers and Haptoglobin. f Relative tetraspanins expression of EVs. The average of tetraspanins (CD9, CD63 and CD81) expression of each protocol was normalized to the Standard in order to have a relative measurement of EVs purity.

The researchers confirmed the existence of exosome-like vesicles in the fluid fraction of uterine aspirates. They were successfully isolated by differential centrifugation giving sufficient proteomic and transcriptomic material for further analyses. The Standard protocol was the best performing procedure since the other two tested protocols did not ameliorate neither yield nor purity of exosome-like vesicles. This study contributes to establishing the basis for future comparative studies to foster the field of biomarker research in gynecology.