A team led by researchers from the Higher Council for Scientific Research (CSIC) has described a method to analyze molecules, which indicate the existence of a pathology, in nanovesicles also called extracellular vesicles (small particles released by cells and found in fluids bodily) The method, published in the journal Scientific Reports , allows to obtain information on these tiny vesicles directly from urine samples and analyze their composition. In this way, it is easily transferable to clinical practice and has the advantage that it does not involve invasive procedures for the patient.

In recent years it has been observed that all body cells can generate these vesicles and are detected in biological fluids, such as blood and urine. “This method focuses on analyzing extracellular vesicles that play a fundamental role in the communication and transport of substances between different components of the organism. His study is considered key to identify and validate new biomarkers (pathology marker molecules, such as cholesterol) in the clinic, ”explains the project director, researcher Mar Valés , of the National Center for Biotechnology.

“The development of this technique opens the way, therefore, to the search for new targets in liquid biopsy for the diagnosis, prognosis or monitoring of patients aimed at a better selection of the appropriate therapy for each patient. By using the same equipment used in hospitals for blood tests, our effort is aimed at making affordable personalized medicine a reality, ”says Dr. Valés.

“With the new method we managed to characterize the nanovesicles from very small amounts of body fluids, without the need for special processing, increasing the efficiency of the process and the sensitivity of the detection,” adds Dr. Valés.

Until now, the methods to determine the identity of the components in the nanovesicles were slow, required specialized scientific machinery and personnel, and needed a large sample volume. In addition, complex processing was required, prior to the analysis of the samples and, in many cases, it was not easy to distinguish the contaminant elements isolated simultaneously.

Now, the new method described by Valés et al. Selects the vesicles and separates them from the rest of the components allowing to obtain information from urine samples using a volume more than ten times lower than that required with current techniques. 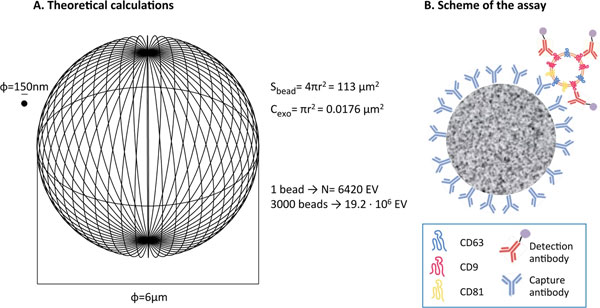 (A) Theoretical calculation of the number of EVs immobilised per bead. The graph represents at real scale a 6 μm-diameter bead and an EV of 150 nm of diameter (ɸ). The external surface of a bead (Sbead) could capture a maximum of N times the circle area (Cexo) of 150 nm EVs. N is calculated by dividing Sbead/Cexo. (B) Schematic representation, not to scale, of the bead binding assay. 6 μm-diameter fluorescent magnetic beads were coated with capture antibody and used for immune-capture of the EVs. A second antibody directed against the same or a different molecule, either biotinylated or directly conjugated with PE, was used for detection. In the case of biotinylated antibodies, PE-conjugated streptavidin was subsequently used. Samples were analysed by conventional flow cytometry.

The work has been led by researchers from the National Biotechnology Center of the CSIC, in collaboration with scientists from the Autonomous University of Madrid, specialists from La Paz University Hospital and the Spanish company Immunostep, SL

The composition of extracellular vesicles varies in response to pathological situations, with vesicles from healthy cells being different from those that undergo some change, for example, an infection or a tumor transformation. These characteristics of the extracellular vesicles make them begin to be considered as tools for the diagnosis of diseases and many researchers include them in the term of liquid biopsy, introduced in the clinic in recent years to refer to a non-invasive alternative to surgical biopsy. or conventional In this way, with a simple blood or urine test, information about a tumor could be obtained.

The current challenge for researchers is to obtain a qualitative and standard analysis system that can be used in different laboratories and hospitals.