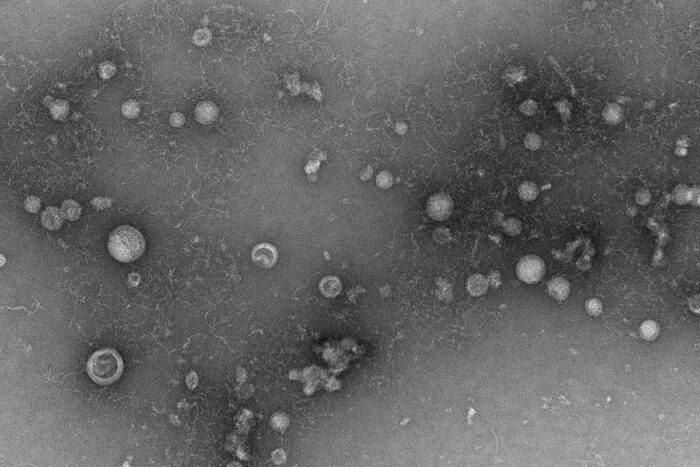 Shown is a transmission electron microscope image of exosomes purified from fluid from the lungs of a patient with COPD. A new study from Washington University School of Medicine in St. Louis has uncovered a previously unknown role for exosomes in inflammatory respiratory diseases. The study has implications for finding new therapies. Exosomes are tiny compartments released from cells that carry different types of cargo, including inflammatory chemicals called cytokines that can drive lung disease.

Inflammatory lung diseases such as asthma, COPD and, most recently, COVID-19, have proven difficult to treat. Current therapies reduce symptoms and do little to stop such diseases from continuing to damage the lungs. Much research into treating chronic inflammatory diseases has focused on blocking chemicals called cytokines, which trigger cascades of molecular events that fuel damaging inflammation.

Now, scientists at Washington University School of Medicine in St. Louis have found that such cytokines can drive inflammation in more ways than previously understood, perhaps revealing new routes to potential treatments for chronic inflammatory conditions.

A new study demonstrates that in addition to raining down directly into tissues and triggering damaging events, cytokines can come packaged in tiny compartments called exosomes, making the packaged cytokines extremely difficult to detect and nearly impossible to study without specialized instruments. Not being able to study these exosomes means scientists could be missing important strategies to treat or prevent inflammatory disease. 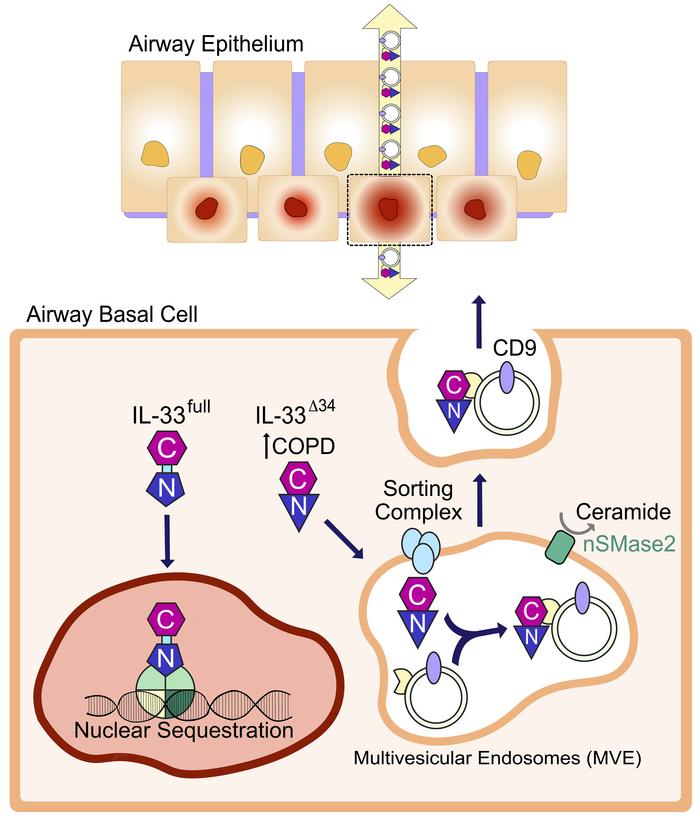 The study, in JCI Insight, also demonstrates that understanding how these inflammatory cytokines are packaged can reveal new ways to block them, preventing lung disease from developing, at least in mice.

“In trying to understand and better treat inflammatory disease in patients, scientists have focused heavily on blocking cytokines, which we know are key players in setting off inflammatory processes and keeping them smoldering,” said senior author Jennifer Alexander-Brett, MD, PhD, an assistant professor of medicine in the Division of Pulmonary and Critical Care Medicine. “How a particular family of cytokines gets out of cells to trigger inflammation has been a mystery that has stymied the field for a long time. At the same time, people started to recognize that these structures called exosomes are doing something, though it was unclear what. They’re small, difficult to isolate and easily overlooked. But with new technology, we’re starting to understand that key cytokines can be packaged in exosomes in ways that completely change the way we would target them to develop anti-inflammatory therapies.”

Based on prior work from Alexander-Brett, Michael J. Holtzman, MD, the Selma and Herman Seldin Professor of Medicine, and other investigators at Washington University, it has long been known that a specific cytokine called IL-33 is a central player in the development of chronic lung diseases, such as COPD and asthma. Indeed, this cytokine also is implicated in arthritis, inflammatory bowel disease, hepatitis, heart failure, inflammation of the central nervous system and cancer. But how it triggers inflammation was unknown. The new research shows that IL-33 is released into the airway, packaged with an exosome. Complicating matters further, IL-33 doesn’t travel inside the exosome; it piggybacks on the outside.

With a new understanding of the packaging, the researchers tried a different method to block the inflammatory signaling of IL-33. They studied mice that develop lung disease due to inhaling a type of fungus; the disease, mimics, for example, the development of asthma due to an inhaled allergen. The researchers showed that they could block airway disease from developing in mice exposed to the fungus by treating them with a compound that blocks exosome secretion, rather than IL-33 directly.

“This study opens up many new questions about how cytokine signaling might be different when the cytokine is bound to an exosome,” Alexander-Brett said. “It’s possible exosome packaging is a key feature of cytokines that are not secreted in the classical way. This new understanding of cytokine signaling could lead to completely different ways of targeting it to treat diseases such as COPD. At the moment, we have no treatments that reverse or even slow COPD. We can only treat symptoms.”

Alexander-Brett said that until recently, this type of exosome activity would have been extremely difficult to detect. Her lab has a relatively new instrument called a single-particle interferometric reflectance imaging system (SP-IRIS) that lets her team study exosomes using very small amounts of biological samples.

For asthma and COPD, Alexander-Brett said her lab is seeking more precise ways to block specific exosomes, since a strategy that blocks all of them across the board, as in this mouse study, likely would stop some beneficial processes as well.

“We need more research to find an inhibitor that might block IL-33 from even being incorporated into the exosome, which would theoretically stop the initial trigger of chronic lung disease,” Alexander-Brett said. “Ideally, we would like to find something that we could deliver as an inhaled drug that would target the effects to the airway, where it’s needed.”