Nanovesicles, exosomes and other membrane bound particles excreted by cells are currently gaining research attention since they have been shown to play a significant role in many biologically related processes. Vesicles are now thought to mediate cellular communication, transmission of some diseases and pathologically mediated calcification. Matrix vesicles have long been proposed to be central to the controlled mineralisation of bone. They remain relatively poorly studied, however, since they are challenging to extract from biological media. One difficulty is the presence of a mineral content in comparison to pure lipid vesicles, meaning that standard separation process such as ultracentrifugation are unable to precisely separate on the basis of size or weight.

Engineers from the University of Birmingham report the separation of matrix vesicles from an organotypic bone culture system using a process of immunoprecipitation. Matrix vesicles were extracted using polymeric beads that were modified with an antibody for tissue non-specific alkaline phosphatase (TNALP), a surface marker abundant in bone-derived vesicles. The vesicles isolated were positive for adenosine triphosphate (ATP), the substrate for TNALP and were demonstrated to have a high-binding affinity to type I collagen, the principal collagen type found in bone. This protocol enables more detailed study of the process and regulation of mineralisation. 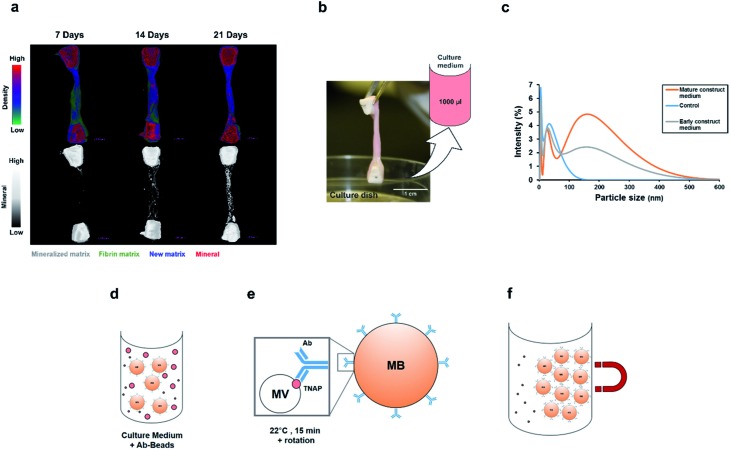 (a) Bone-tissue-like constructs containing osteoblastic cells were developed and cultured for extended periods of time, during which, a process of ossification took place and the matrix increased in density due to significant mineral deposition. Culture medium was collected from culture dishes at various time points (b) and subjected to nanoparticle analysis. (c) Dynamic light scattering analysis of samples from control (serum supplemented, cell-free), 14 days and 1 year-old medium samples. Compared with controls, media from both young and mature constructs contained nanoparticles in the size range of 50–300 nm. (d) Immuno-isolation of matrix vesicles from this population was performed by incubating 1000 μl of culture medium with the Ab–MB complexes for 15 minutes at room temperature, in PBS-Tween 20. Monoclonal antibodies attached to the vesicles containing TNAP on their outer membranes via their Fab regions (e). The Ab–MB–MV complexes were separated from unbound antibodies and particles using magnetic separation (f). Ab = Antibody, MB = Magnetic Bead.