Libraries of single-stranded oligodeoxynucleotides (ssODNs) can be enriched for sequences that specifically bind molecules on naïve complex biological samples like cells or tissues. Depending on the enrichment strategy, the ssODNs can identify molecules specifically associated with a defined biological condition, for example a pathological phenotype, and thus are potentially useful for biomarker discovery.

Caris Life Sciences’ researchers performed ADAPT, a variant of SELEX, on exosomes secreted by VCaP prostate cancer cells. A library of ∼1011 ssODNs was enriched for those that bind to VCaP exosomes and discriminate them from exosomes derived from LNCaP prostate cancer cells. Next-generation sequencing (NGS) identified the best discriminating ssODNs, nine of which were resynthesized and their discriminatory ability confirmed by qPCR. Affinity purification with one of the sequences (Sequence 7) combined with LC–MS/MS identified its molecular target complex, whereof most proteins are part of or associated with the multiprotein ESCRT complex participating in exosome biogenesis. Within this complex, YBX1 was identified as the directly-bound target protein. ADAPT thus is able to differentiate exosomes from cancer cell subtypes from the same lineage. The composition of ESCRT complexes in exosomes from VCaP versus LNCaP cells might constitute a discriminatory element between these prostate cancer subtypes. 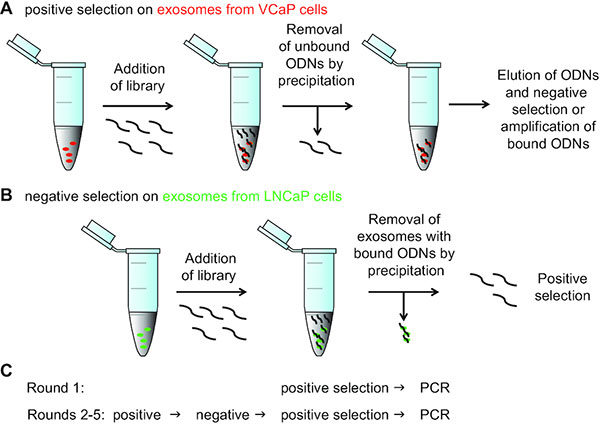 (A) A highly diverse library of 1011 ssODNs was subjected to five rounds of positive selection. (B) Schematic for the negative selection cycle introduced at round 2 for the remaining selection. After mixing of exosomes with ODN library the unbound DNA was removed by precipitating exosomes and bound ssODNs by polymer. (C) Summary of the succession of selection rounds against exosomes from VCaP and LNCaP prostate cancer cell lines.