The current ebola outbreak in West Africa demonstrates the urgent need for therapeutic strategies to defend against emerging pandemic threats.  It also highlights why the Department of Health and Human Services (HHS) has shifted the focus of government biodefense and pandemic threat initiatives toward broad-spectrum therapies able to target multiple pathogens. At present, a majority of all infectious viruses are not addressed by drug therapies, which are designed to inhibit or block replication of a single viral species.

At Aethlon Medical, we are intersecting advanced biology with modern plasma membrane technology to rethink the treatment of viral pathogens. The result is the Aethlon Hemopurifier®, a therapeutic device that has been validated to capture a broad-spectrum of viral pathogens and immunosuppressive proteins through affinity binding to a unique high-mannose structure that is co-opted from the host (the infected individual) as a means for viruses to evade detection of the host immune system. We have also discovered that this signature exists on tumor-secreted exosomes that promote cancer progression. 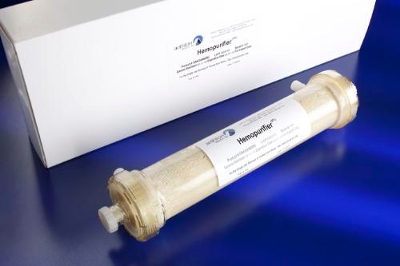 We believe our Hemopurifier® is the most advanced and perhaps only true broad-spectrum countermeasure against emerging pandemic threats such as ebola, and viral threats that could be weaponized to purposely infect civilian and military populations. Our belief is supported by human clinical outcomes and supporting in vitro studies conducted at leading government and non- government labs.

Last week, a story published on CNN.com (http://ireport.cnn.com/docs/DOC-1157208?ref=feeds%2Flatest), suggested that our Hemopurifier® might be an ebola treatment cure.  In this regard, I want to clarify that we created the Hemopurifier® to provide a post-exposure treatment strategy to mitigate illness, suffering, and death resulting from exposure to viral pathogens. However, we do not represent that our Hemopurifier® is a cure for ebola.  It is designed to augment the ability of the immune system to overcome infection and to increase the benefit of drug therapy in disease conditions where an antiviral agent might be indicated.

I also want to provide clarity on what Hemopurifier® studies have been conducted specific to the ebola virus.  On October 17th, 2007, Dr. Laura Barrientos at the United States (US) Centers for Disease Control and Prevention (CDC), published a report entitled: “The Aethlon Hemopurifier®, A Novel Strategy to Address ebola and Marburg Haemorrhagic Fevers.”

The report discussed the potential of the Aethlon Hemopurifier® as a treatment countermeasure against ebola and other filoviruses.  An excerpt from the report follows:  “The Hemopurifier® is an extracorporeal device which converges hollow-fiber filtration technology with immobilized affinity agents to allow for the rapid physical removal of virus and soluble viral glycoproteins from the blood. The device basically mimics the natural immune response for clearance of circulating virus and viral toxins. Initial collaborative efforts between the CDC and Aethlon Medical have demonstrated rapid clearance of viral particles from cell culture supernatants (t1/2 20-120 min). The Hemopurifier® was also effective in removing soluble viral glycoproteins (t1/2 30 min). This knowledge represents the basis to further investigate in vivo the potential of the Hemopurifier® as a fast-acting post-exposure intervention to delay disease progression and, possibly, to improve survival. The data resulting from the CDC-Aethlon collaboration has led to further studies through a collaborative research and development agreement with the United States Army Medical Research Institute for Infectious Diseases (USAMRIID).” The full report can be accessed online at: http://www.aethlonmedical.com/assets/001/5017.pdf

In a follow-on disclosure, we reported that the USAMRIID studies documented that the Hemopurifier® captured approximately 50% of both wild type and mutant strains of ZEBOV (Zaire strain of ebola) from fluids during one hour in vitro studies. ZEBOV has the highest virus case-fatality rate, up to 90% in some epidemics, with an average case fatality rate of approximately 83% over the previous 27 years. USAMRIID, serves as the lead laboratory for the U.S. Medical Biological Defense Research Program, and plays a key role in national defense and in infectious disease research. USAMRIID operates the only laboratory in the Department of Defense (DOD) equipped to study ebola and other highly hazardous infectious agents requiring maximum containment at bio-safety level four (BSL-4).

The study will also contribute data toward the human safety challenge requirement to advance Hemopurifier® therapy as a broad-spectrum countermeasure against viral bioterror and pandemic threats (including ebola), whose lethality do not allow for the administration of clinical efficacy studies. We are actively investigating Emergency Use Authorization (EUA) approvals based on our previous human treatment experiences and broad-spectrum validation studies against viral pathogens.  We are also exploring Humanitarian Use Device (HUD) pathways for orphan conditions that affect fewer than 4,000 individuals in the U.S. each year.

Should the outbreak of deadly viral pathogen provide us with opportunities to treat, we would first request clarity from the FDA that our response would not threaten our long-term clinical objectives in the United States. Additionally, we would request FDA interaction to provide feedback on data-points that could be collected to support future EUA and HUD approvals.  In this regard, I want to share that we have initiated our dialog with FDA. The results of these discussions will determine whether we request an opportunity to treat those infected with ebola virus.

About Aethlon Medical, Inc.
Aethlon Medical creates innovative medical devices to address life-threatening diseases. The Aethlon ADAPT™ (Adaptive Dialysis-like Affinity Platform Technology) establishes the basis for a new class of therapeutics that target the rapid elimination of disease enabling particles from the circulatory system of treated patients.  The lead Aethlon ADAPT™ product is the Hemopurifier®, a device that addresses a broad-spectrum of viral pathogens as well as tumor-secreted exosomes that suppress the immune system of cancer patients.  Aethlon is also operating under two government contracts with the Defense Advanced Research Projects Agency (DARPA) related the development of a medical device to reduce the incidence of sepsis. Exosome Sciences, Inc. is a majority owned Aethlon subsidiary that is advancing exosome-based strategies to diagnose and monitor cancer and infectious disease progression.  Additional information can be found at www.AethlonMedical.com