Researchers at the Medical University of Vienna previously showed that, when peripheral blood mononuclear cells (PBMCs) were stressed with ionizing radiation, they released paracrine factors that showed regenerative capacity in vitro and in vivo. This study aimed to characterize the secretome of PBMCs and to investigate its biologically active components in vitro and vivo. Bioinformatics analysis revealed that irradiated PBMCs differentially expressed genes that encoded secreted proteins. These genes were primarily involved in (a) pro-angiogenic and regenerative pathways and (b) the generation of oxidized phospholipids with known pro-angiogenic and inflammation-modulating properties. Subsequently, in vitro assays showed that the exosome and protein fractions of irradiated and non-irradiated PBMC secretome were the major biological components that enhanced cell mobility; conversely, secreted lipids and microparticles had no effects. The researchers tested a viral-cleared PBMC secretome, prepared according to good manufacturing practice (GMP), in a porcine model of closed chest, acute myocardial infarction. They found that the potency for preventing ventricular remodeling was similar with the GMP-compliant and experimentally-prepared PBMC secretomes. 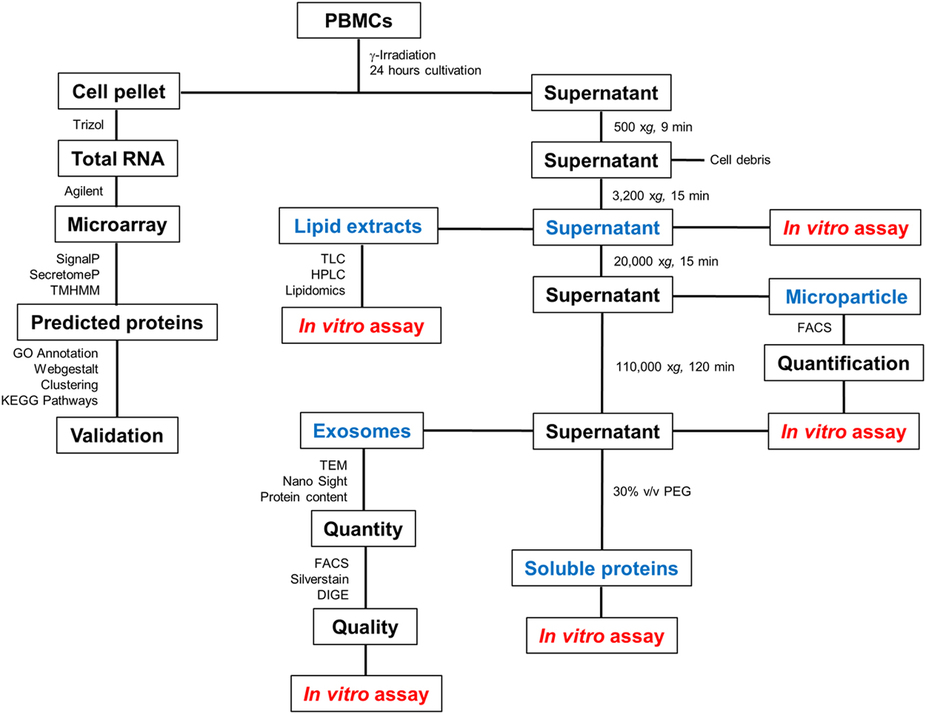 Schematic overview of experimental workflow. PBMCs were either gamma-irradiated with 60 Gy or not irradiated. After culturing for the indicated times, cells were centrifuged to separate the cell pellet and CM supernatant. The pellet was used to extract cellular RNA, which was used for microarray analysis. The CM supernatant was processed to separate and isolate different molecular components. The steps highlighted in blue indicate samples used for in vitro assays. The different methods and bioinformatics tools used for sample analyses are indicated at the appropriate links.

These results indicate that irradiation modulates the release of proteins, lipid-mediators and extracellular vesicles from human PBMCs. In addition the findings implicate the use of secretome fractions as valuable material for the development of cell-free therapies in regenerative medicine.