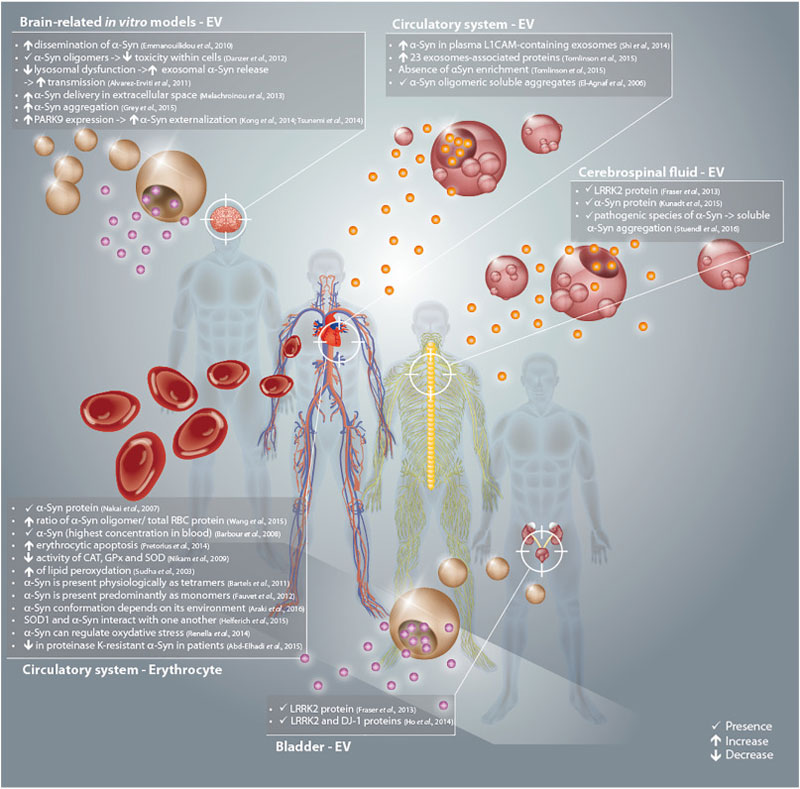 A new blood-based analysis that evaluates the levels and content of tiny vesicles released by red blood cells may help diagnose patients with Parkinson’s disease according to disease stage, researchers suggest.

The new method was described in the study, “Portrait of blood-derived extracellular vesicles in patients with Parkinson’s disease,” published in Neurobiology of Disease.

Parkinson’s disease is linked to a broad spectrum of clinical manifestations and several molecular mechanisms.

This represents a challenge for the development and identification of useful biomarkers for diagnosis and disease progression, as well as to track the effectiveness of new treatments.

All human cells produce tiny vesicles containing fatty molecules, proteins, and genetic information, which they release to the surrounding environment. These so-called extracellular vesicles are produced both in healthy and disease conditions, and are used by cells to communicate among themselves.

Given the major role these extracellular vesicles may have, researchers hypothesized that their cargo could hold useful information on the biological state of the body, representing a possible new diagnostic tool.

To this end, Canadian researchers developed a new method of isolating extracellular vesicles from blood samples that would preserve their integrity, while still removing any potential contaminants.

Using flow cytometry, a technique that allows the visualization and sorting of cells and small particles according to their size and shape, the team could identify not only extracellular vesicles but also which cells originated them. After the vesicles were isolated, the team could analyze their content.

They found that Parkinson’s patients had about 1.8 times more extracellular vesicles released by red blood cells than healthy controls. However, upon further analysis, the team found that only five patients were responsible for this significant difference, implying that the number of extracellular vesicles could not be used to differentiate between Parkinson’s patients and healthy controls.

The quantity of extracellular vesicles released by other blood cell types was similar between groups.

When researchers analyzed vesicle numbers in regards to patients’ disease severity status — measured by total scores on the Unified Parkinson Disease Rating Scale (UPDRS) — they found that at least 87% of the variation in the total number of red blood cell-derived vesicles was due to a variation in UPDRS scores.

To validate their results, the team used the same analysis approach in a new set of blood samples collected from 42 Parkinson’s patients. Once more, they found they could use the number of red blood cell-derived extracellular vesicles to distinguish between patients according to their UPDRS scores.

Analysis of the content of the isolated vesicles revealed a total of 818 proteins, eight of which were found in significantly different amounts between controls and patients, allowing researchers to group individuals according to stages of disease (control, mild Parkinson’s, and moderate Parkinson’s).

“Our study shed light on a potential biomarker indicative of disease stage, which is derived from 2 measures: the number of [red blood cells-derived extracellular vesicles] and the expression of 8 different proteins,” the researchers wrote.

Although the analysis and isolation of extracellular vesicles through flow cytometry may not be accessible to all laboratories, “identification of specific proteins that match clinical stages of Parkinson’s” could be performed using simple and less expensive techniques, according to the researchers.

“The ability to develop a biomarker that not only works as a diagnostic tool but a predictor of disease stages/course would represent a major breakthrough in the field, opening up to new therapeutic opportunities,” they concluded.