Docosahexaenoic acid (DHA) is a natural compound with anticancer and anti-angiogenesis activity that is currently under investigation as both a preventative agent and an adjuvant to breast cancer therapy. However, the precise mechanisms of DHA’s anticancer activities are unclear. It is understood that the intercommunication between cancer cells and their microenvironment is essential to tumor angiogenesis. Exosomes are extracellular vesicles that are important mediators of intercellular communication and play a role in promoting angiogenesis. However, very little is known about the contribution of breast cancer exosomes to tumor angiogenesis or whether exosomes can mediate DHA’s anticancer action.

Researchers from the University of Oklahoma Health Sciences Center collected exosomes from MCF7 and MDA-MB-231 breast cancer cells after treatment with DHA. 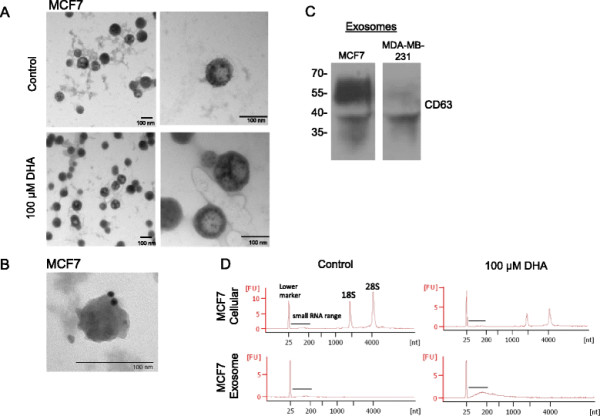 The researchers observed an increase in exosome secretion and exosome microRNA contents from the DHA-treated cells. The expression of 83 microRNAs in the MCF7 exosomes was altered by DHA (>2-fold). The most abundant exosome microRNAs (let-7a, miR-23b, miR-27a/b, miR-21, let-7, and miR-320b) are known to have anti-cancer and/or anti-angiogenic activity. These microRNAs were also increased by DHA treatment in the exosomes from other breast cancer lines (MDA-MB-231, ZR751 and BT20), but not in exosomes from normal breast cells (MCF10A). When DHA-treated MCF7 cells were co-cultured with or their exosomes were directly applied to endothelial cell cultures, they observed an increase in the expression of these microRNAs in the endothelial cells. Furthermore, overexpression of miR-23b and miR-320b in endothelial cells decreased the expression of their pro-angiogenic target genes (PLAU, AMOTL1, NRP1 and ETS2) and significantly inhibited tube formation by endothelial cells, suggesting that the microRNAs transferred by exosomes mediate DHA’s anti-angiogenic action. These effects could be reversed by knockdown of the Rab GTPase, Rab27A, which controls exosome release.