Recently, biological roles of extracellular vesicles (which include among others exosomes, microvesicles and apoptotic bodies) have attracted substantial attention in various fields of biomedicine. Here, researchers at Semmelweis University investigated the impact of sustained exposure of cells to the fluoroquinolone antibiotic ciprofloxacin on the released extracellular vesicles. Ciprofloxacin is widely used in humans against bacterial infections as well as in cell cultures against Mycoplasma contamination. However, ciprofloxacin is an inducer of oxidative stress and mitochondrial dysfunction of mammalian cells. Unexpectedly, here the researchers found that ciprofloxacin induced the release of both DNA (mitochondrial and chromosomal sequences) and DNA-binding proteins on the exofacial surfaces of exosomes. Furthermore, a label-free optical biosensor analysis revealed DNA-dependent binding of exosomes to fibronectin. DNA release on the surface of exosomes was not affected any further by cellular activation or apoptosis induction. These results reveal for the first time that prolonged low-dose ciprofloxacin exposure leads to the release of DNA associated with the external surface of exosomes. 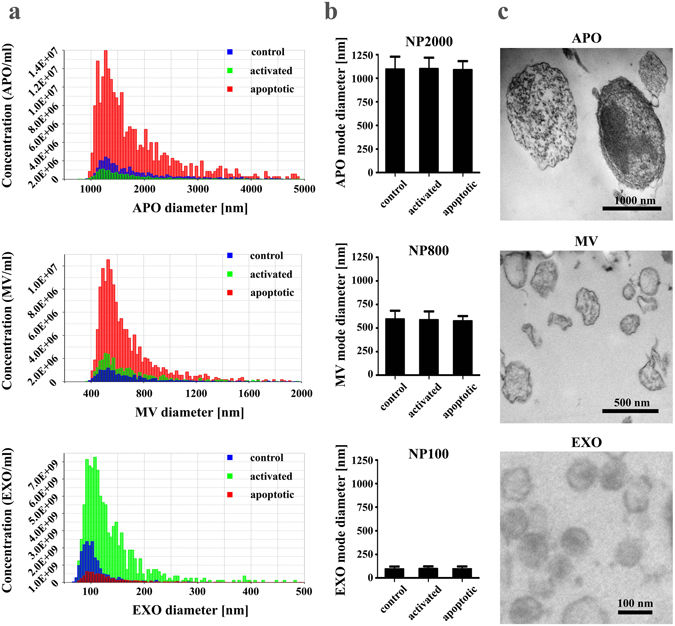 (a) Concentration values of EVs in 100 µL (isolated from the supernatant of 2.5 × 107 cells) were determined by tunable resistive pulse sensing (TRPS), and are plotted as a function of their diameter for control, activated or apoptotic cells (blue, green or red colors, respectively). Histogram plots of EVs are representative of three independent experiments. (b) Mode diameters of EV subpopulations were determined by TRPS, and are presented+/− S.D. (error bars) of three independent experiments, for control, activated and apoptotic cells. NP2000, NP800 and NP100 IZON nanopore membranes were used. (c) Transmission electron microscopy images of apoptotic bodies (APOs), microvesicles (MVs) and exosomes (EXOs) samples.