Tiny extracts of a precious metal used widely in industry could play a vital role in new cancer therapies.

Researchers have found a way to dispatch minute fragments of palladium – a key component in motor manufacture, electronics and the oil industry – inside cancerous cells.

Scientists have long known that the metal, used in catalytic converters to detoxify exhaust, could be used to aid cancer treatment but, until now, have been unable to deliver it to affected areas.

A molecular shuttle system that targets specific cancer cells has been created by a team at the University of Edinburgh and the Universidad de Zaragoza in Spain.

The new method, which exploits palladium’s ability to accelerate – or catalyse – chemical reactions, mimics the process some viruses use to cross cell membranes and spread infection.

The team has used bubble-like pouches that resemble the biological carriers known as exosomes, which can transport essential proteins and genetic material between cells. These exosomes exit and enter cells, dump their content, and influence how the cells behave.

This targeted transport system, which is also exploited by some viruses to spread infection to other cells and tissues, inspired the team to investigate their use as shuttles of therapeutics.

We have tricked exosomes naturally released by cancer cells into taking up a metal that will activate chemotherapy drugs just inside the cancer cells, which could leave healthy cells untouched.

The researchers have now shown that this complex communication network can be hijacked. The team created exosomes derived from lung cancer cells and cells associated with glioma – a tumour that occurs in the brain and spinal cord – and loaded them with palladium catalysts.

These artificial exosomes act as Trojan horses, taking the catalysts – which work in tandem with an existing cancer drug– straight to primary tumours and metastatic cells.

Having proved the concept in laboratory tests, the researchers have now been granted a patent that gives them exclusive rights to trial palladium-based therapies in medicine.

Preparation and characterization of Pd-functionalized exosomes 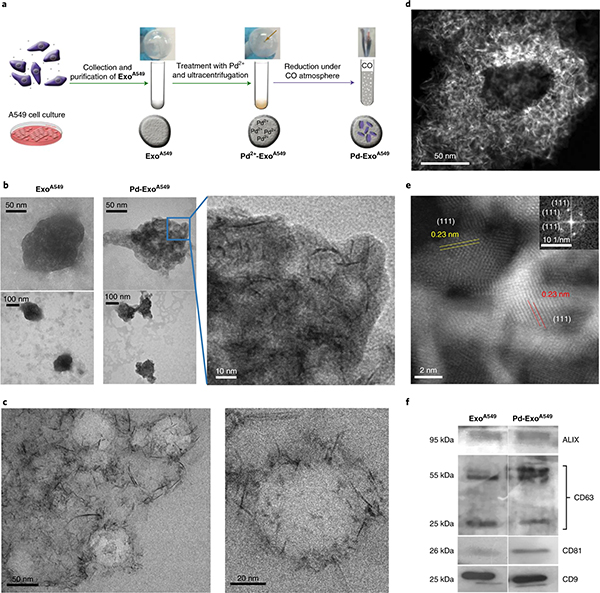 a, An overview of the step-wise protocol to generate Pd-ExoA549 from A549 cells. b, Representative TEM images of ExoA549 and Pd-ExoA549 at different magnifications. c, Representative cryo-TEM images of Pd-ExoA549 at two magnifications. d, A HRSTEM–HAADF image of a representative Pd-ExoA549. e, A magnified HRSTEM–HAADF image that shows highly crystalline Pd nanostructures with d-spacing of 0.23 nm that corresponds to Pd(111) surfaces. The inset shows the fast Fourier transform spectrum generated from the image. f, Western blots of exosome-specific biomarkers ALIX, CD63, CD81 and CD9 of ExoA549 and Pd-ExoA549.

The study was funded by the Engineering and Physical Sciences Research Council and the European Research Council. It has been published in the journal, Nature Catalysis.

This has the potential to be a very exciting technology. It could allow us to target the main tumour and metastatic cells, thus reducing the side effects of chemotherapy without compromising the treatment.