Diabetic wounds, one of the most enervating complications of diabetes mellitus, affect millions of people worldwide annually. Vascular insufficiency, caused by hyperglycemia, is one of the primary causes and categories of diabetic impaired wound healing. Recently, long noncoding RNA (LncRNA)-H19, which is significantly decreased in diabetes and may be crucial in triggering angiogenesis, has attracted increasing interest. The possible relationship between the decrease of LncRNA-H19 and the impairment of angiogenesis in diabetes could involve impairment of the insulin-phosphatidylinositol 3-kinase (PI3K)-Akt pathway via the interdiction of LncRNA-H19. Thus, a therapeutic strategy utilizing LncRNA-H19 delivery is feasible.

Researchers from Shanghai Jiao Tong University investigated the possibility of using high-yield extracellular vesicle-mimetic nanovesicles (EMNVs) as an effective nano-drug delivery system for LncRNA, and studied the function of EMNVs with a high content of LncRNA-H19 (H19EMNVs). The results, which were exciting, showed that H19EMNVs had a strong ability to neutralize the regeneration-inhibiting effect of hyperglycemia, and could remarkably accelerate the healing processes of chronic wounds. These results suggest that bioengineered EMNVs can serve as a powerful instrument to effectively deliver LncRNA and will be an extremely promising multifunctional drug delivery system in the immediate future.

Preparation and characterization of EMNVs 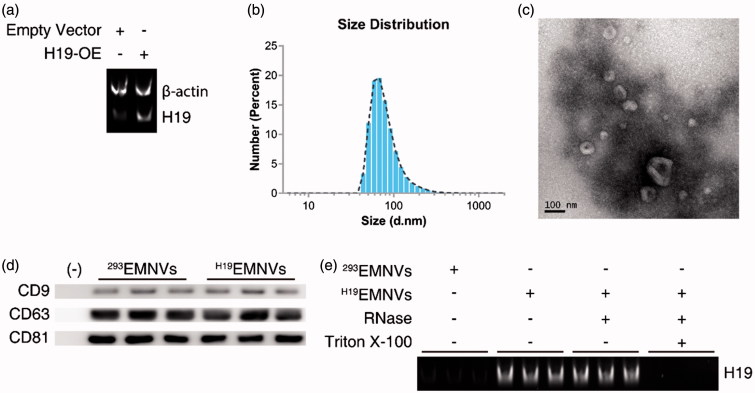