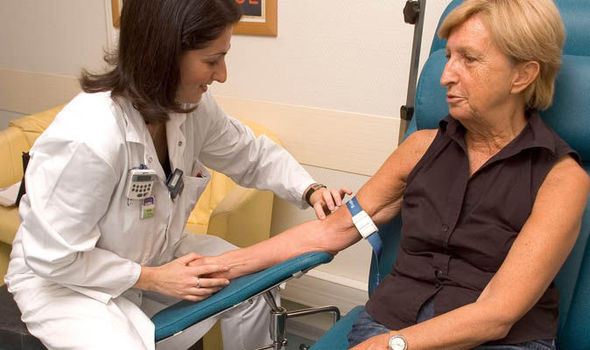 from Express.co.uk By Giles Sheldrick

A SIMPLE blood test could hold the key to predicting Alzheimer’s years before symptoms of the disease such as memory loss appear.

Scientists say a new screening process shows “real promise” in identifying those at risk of the condition at least a decade before the onset of telltale signs.

The race to develop an early warning system comes as Britain faces a dementia time bomb with more than two million expected to be struck down by 2050.

American researchers think proteins released by brain cells into the blood could act as “biomarkers” for dementia.

The test could also unlock information about the process that triggers the condition, paving the way for treatments.

“In order to treat people efficiently, we need to identify the population that is at a high risk as early as we can.”

Neuroscience specialists at the University of California, San Francisco, hit on the breakthrough after investigating four protein molecules released by brain cells into the blood called exosomes.

Crucially, they also analysed blood from 20 people with Alzheimer’s or aMCI who had given a sample up to 10 years before they were diagnosed. These were compared with 20 people without memory problems.

The study is very promising to develop an early diagnosis system…In order to treat people efficiently, we need to identify the population that is at a high risk as early as we can.

The results showed that people with Alzheimer’s and aMCI had similar differences in exosome levels compared with healthy people, even before their symptoms developed.

“Research like this can also provide valuable clues about changes inside brain cells during Alzheimer’s, helping to guide efforts to develop new and effective treatments,” he added.

Alzheimer’s develops when chemical clumps accumulate in the brain. There is currently no cure for a disease more Britons say frightens them than any other.

Study author Edward Goetzl said: “There is an urgent need for biomarkers that accurately detect pathogenic components of Alzheimer’s before appearance of neurologic signs.

“Early treatments directed to such targets could limit or reverse neuronal damage and prevent development of overt Alzheimer’s disease.”