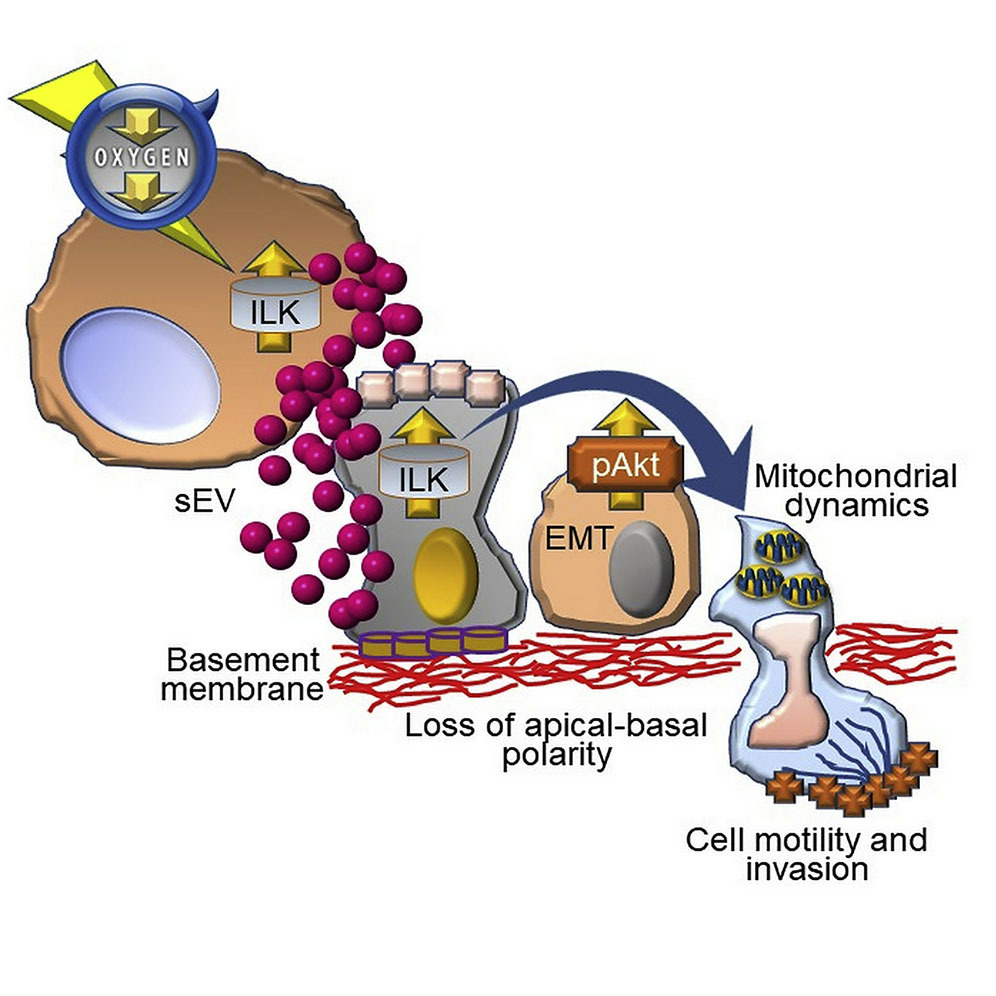 According to a study by The Wistar Institute, breast cancer cells starved for oxygen send out messages that induce oncogenic changes in surrounding normal epithelial cells. These messages are packaged into particles called extracellular vesicles (EVs) and reprogram mitochondrial shape and position within the recipient normal cells to ultimately promote deregulated tissue morphogenesis.

“It is well known that cancer cells ‘talk’ to their neighboring normal cells all the time and this is important to promote cancer progression,” said study lead author Dario C. Altieri, M.D., Wistar president and CEO, director of the Institute’s Cancer Center and the Robert & Penny Fox Distinguished Professor. “How that happens and what signals are being transferred from one cell to another are still very much open questions. A better understanding of this process may give us important clues about how tumors hijack nearby normal cells to promote disease recurrence.”

For their studies, Altieri’s team cultured breast cancer cells in a low-oxygen setting to mimic a condition known as hypoxia, which is a hallmark of the microenvironment surrounding most solid tumors, and studied the EVs released by these cells.

EVs are tiny structures enclosed in a double membrane layer and released by most cells to transfer different molecules and information to other cells. As such, vesicles are an important means of intercellular communication. In this study, researchers focused on small EVs (sEV) that are between 30 and 150 nm in size.

To dissect the effects of sEVs produced by cancer cells on normal neighboring cells, researchers incubated normal breast epithelial cells with sEVs released by cells maintained in hypoxia. They observed an increase in the ability of normal recipient cells to migrate in culture, which in turn correlated with a redistribution of their mitochondria to the cell periphery. This is consistent with the role played by mitochondria in supporting cell motility, previously described by the Altieri lab.

Altieri and colleagues went on to identify Integrin-Linked Kinase (ILK) as the main signaling component packaged in sEVs, responsible for both mitochondrial changes and increased migration of recipient cells.

“Our findings indicate that breast cancer cells may use sEVs to enable both local and distant disease progression,” said Irene Bertolini, Ph.D., first author of the study and a postdoctoral fellow in the Altieri lab. “Based on these observations, we suggest that therapeutic targeting of ILK or mitochondrial reprogramming may provide novel strategies to disrupt these pro-tumorigenic changes in the microenvironment.”