Can exosomes be used as a cell-based immune therapy against HIV-I?

Dendritic cell (DC)-based immune therapy (IT) against HIV showed variable results. It is known that different factors influence host response to DC-IT. Exosomes derived from DC are regulators of the immune system. In this context, here researchers from the Federal University of Rio Grande do Sul, Brazil hypothesize about the role of the DC-derived exosomes on the DC-IT response. Based on data from RT-PCR array genes expression (focused on the TSG101 gene, an exosome marker) and flow cytometry experiments of a DC-IT against HIV-1 clinical trial, they hypothesize that: During the DC-IT exosomes are used as an additional tool for immune system modulation. In addition, the researchers believe that a low release of exosomes can be more beneficial for the DC-IT response than a high release of exosomes. Their data reinforce the concept that exosomes can act as an immune regulatory tool, however not in a generalized manner, but in a highly precise way. Their hypothesis is based in preliminary experimental data, thus, it should be tested using experimental and functional strategies involving a great number of patients. Once the hypothesis confirmed, the immunomodulatory role of the exosomes during DC-IT must be considered as an important factor in the (I) evaluation, (II) modulation, and (III) success of DC-IT against HIV. 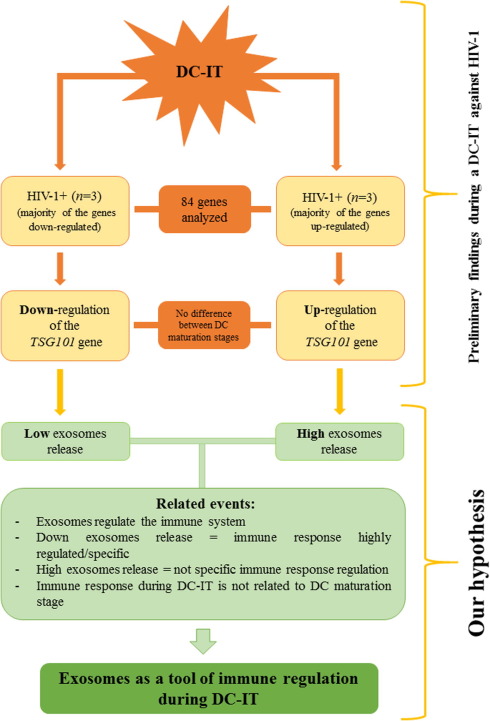