Can we use a simple blood test to detect cancer?

from The Conversation by Elin Gray –

Breast cancer could be detected using a blood test, according to reports out today. Scientists at the Australian National University (ANU) are working with counterparts in France to make this form of cancer detection, that is far less invasive and expensive than other tests such as biopsies, a reality.

Researchers say they’ll be able to test for breast cancer in blood by checking the proportion of certain isotopes, carbon-13 and nitrogen-15 – which are variants of particular chemical elements – in a tissue sample. This can reveal whether the tissue is healthy or cancerous.

But the test is still around ten years away from being used in the clinic, although research in this area is booming. Scientists have been looking for, and finding, ways to track various cancers in blood for some time. Indeed, blood-based testing for solid tumours in not a new development… Genetic analyses of a sample of the tumour, also referred as a biopsy, are becoming standard care in pathology departments. However, a biopsy only provides a snapshot of genomic changes on that particular piece of tumour. A biopsy also commonly requires an invasive surgical procedure, so cannot be performed frequently.

So if changes are occurring over time, decisions based on old results will be outdated. Better methods to study tumour evolution can greatly improve cancer care.

One of the most advanced examples of liquid biopsy application in cancer care is in the treatment of lung cancer. Researchers discovered that around 60% of lung cancers treated with a drug to target something called the epidermal growth factor receptor (EGFR) on cancer cells, become resistant to therapy. Then they found the culprit responsible for the resistance: a small change in the EGFR gene, known as T790M mutation.

Scientists were then able to devise a new drug to target T790M. So when patients develop resistance to the first therapy, they could be treated with this new drug.

In parallel, development of a test to detect this mutation in blood plasma or even urine ctDNA, allows for patients to be monitored and timely change of treatment to occur when resistance starts to show.

Our recent study showed that response to treatment can be tracked by measuring ctDNA in the blood of melanoma patients. A decrease in the amount of ctDNA accurately mirrored the shrinking of the cancer. But more importantly, increases in ctDNA indicated that the cancer was coming back.

This is important as it can expedite treatment change when the cancer is still under control and the patient’s health hasn’t been compromised. We could also detect the development of mutations that the melanoma acquired in its genes to become resistant to treatment. This can inform treatment strategies as more drugs become available for metastatic melanoma. 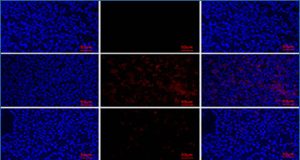