To identify novel cancer therapies, the tumor microenvironment (TME) has received a lot of attention in recent years in particular with the advent of clinical successes achieved by targeting immune checkpoint inhibitors (ICIs). The TME consists of multiple cell types that are embedded in the extracellular matrix (ECM), including immune cells, endothelial cells and cancer associated fibroblasts (CAFs), which communicate with cancer cells and each other during tumor progression. CAFs are a dominant and heterogeneous cell type within the TME with a pivotal role in controlling cancer cell invasion and metastasis, immune evasion, angiogenesis and chemotherapy resistance. CAFs mediate their effects in part by remodeling the ECM and by secreting soluble factors and extracellular vesicles. Exosomes are a subtype of extracellular vesicles (EVs), which contain various biomolecules such as nucleic acids, lipids, and proteins. The biomolecules in exosomes can be transmitted from one to another cell, and thereby affect the behavior of the receiving cell. As exosomes are also present in circulation, their contents can also be explored as biomarkers for the diagnosis and prognosis of cancer patients. In this review, we concentrate on the role of CAFs-derived exosomes in the communication between CAFs and cancer cells and other cells of the TME.

Researchers at Leiden University Medical Center introduce the multiple roles of CAFs in tumorigenesis. They also discuss the ways CAFs communicate with cancer cells and interplay with other cells of the TME, and focus in particular on the role of exosomes. The researchers elaborate on the mechanisms by which CAFs-derived exosomes contribute to cancer progression, as well as and the clinical impact of exosomes. They conclude by discussing aspects of exosomes that deserve further investigation, including emerging insights into making treatment with immune checkpoint inhibitor blockade more efficient.

The origins and functions of CAFs in cancer progression 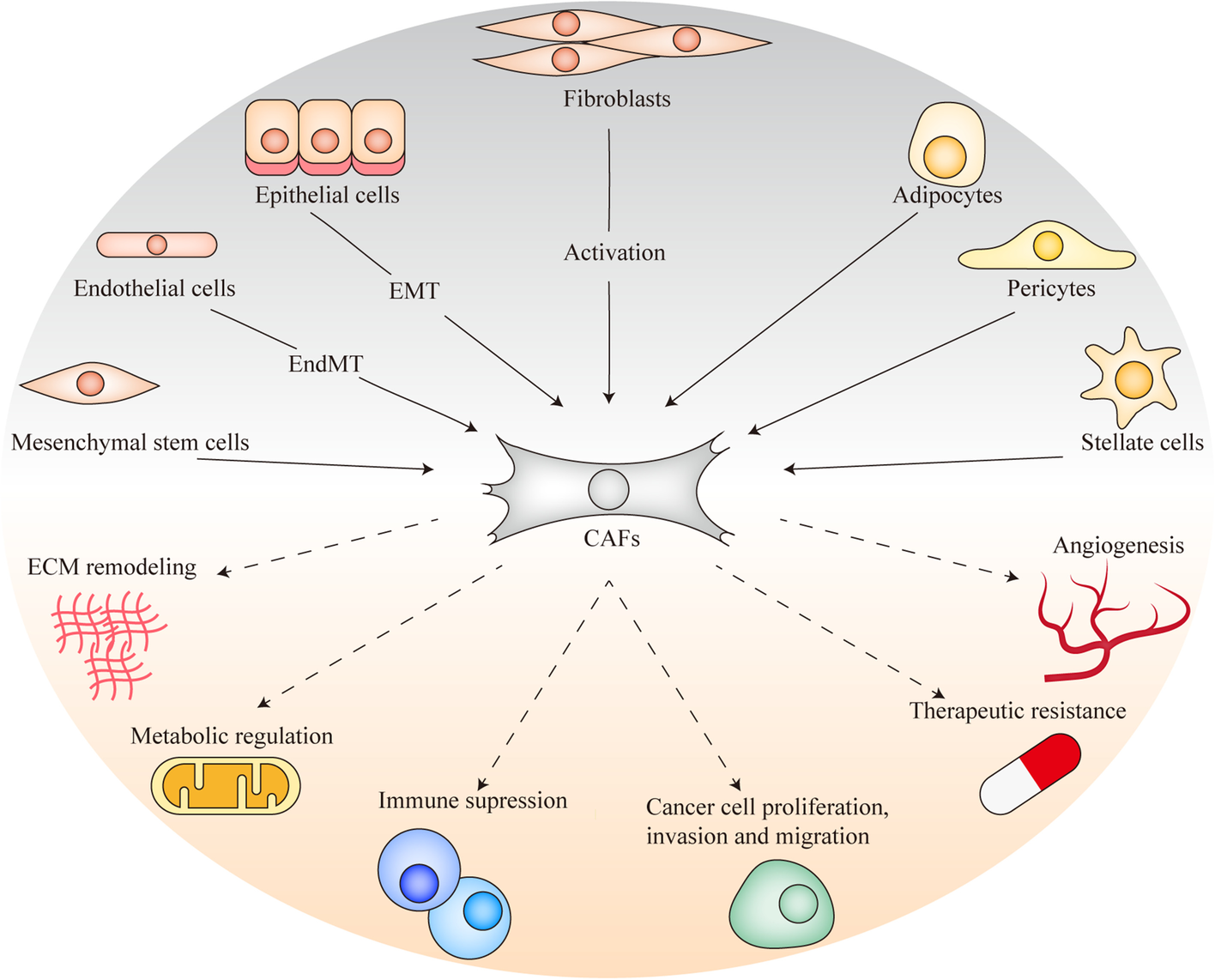 In the TME, CAFs can originate from resident fibroblasts by activation, epithelial cells following EMT, endothelial cells via EndMT, bone marrow-derived mesenchymal stem cells, pericytes, adipocytes and hepatic stellate cells by trans-differentiation. In most cases CAFs have cancer-promoting functions. CAFs play an important role in ECM remodeling by secreting ECM components and enzymes. CAFs can not only serve as physical barriers to protect the cancer cells from the external drugs and the attack of immune cells, but also secrete abundant soluble factors, EVs and ECM to regulate other cells type in TME, which include stimulating cancer cell proliferation, invasion and migration, angiogenesis and therapy resistance. Moreover, CAFs can regulate cancer cell metabolism and stimulate immune evasion of cancer cells