miRNAs modulate gene expression while exosomes are extracellular cargo vessels that transport miRNAs and other materials to surrounding cells. When exosomes are taken up by recipient cells, the released miRNAs can modulate immune responses, inhibit apoptosis, and promote angiogenesis to maintain tumor growth. Central to this regulation is the processing of the primary transcripts into active miRNAs, which occurs exclusively within mammalian cells. Challenging this dogma is the discovery that Dicer and Ago2, key components of miRNA processing, are also present inside exosomes. While the exact nature of this processing requires extensive proof, it is an exciting notion that exogenous miRNA factories could exist outside the canonical boundaries of mammalian cells. 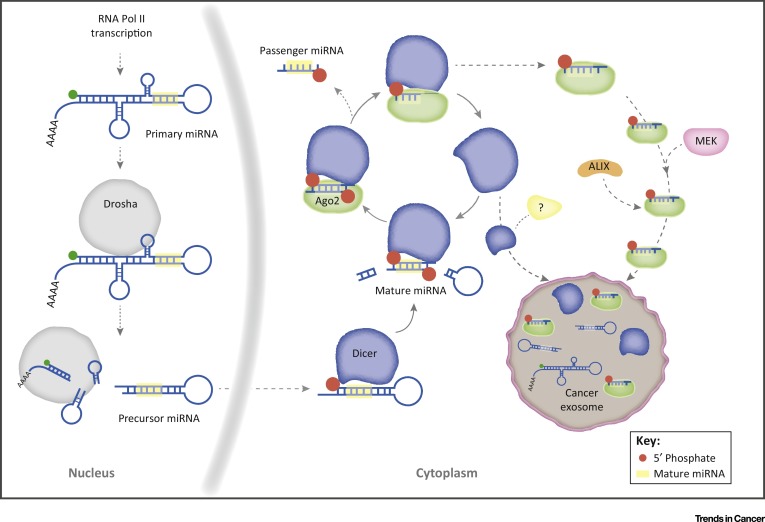 Transcription and processing begins in the nucleus and is completed in the cytoplasm with the generation of a 22-nucleotide (nt) RNA duplex. In the nucleus, RNA polymerase II (Pol II) generates a primary miRNA transcript that harbors the mature miRNA. This primary miRNA is cleaved by the RNASE III enzyme Drosha to form the intermediate precursor miRNA. This stem loop structure is exported to the cytoplasm, where Dicer mediates a second cleavage event to generate the 22-nt miRNA duplex. Only one strand of the miRNA duplex is loaded onto Ago2 and this complex is now able to recruit other accessory proteins to mediate target gene silencing. In this model it is possible that the biogenesis machinery, such as Dicer and Ago2, is also shuttled into the exosome along with primary and precursor miRNAs. Mitogen-activated protein kinase kinases and perhaps Alix can potentially regulate the trafficking of Ago2 into cancer exosomes. The mechanism for Dicer transport into these exosomes is not fully known. On packaging of these miRNA components and other bioactive materials (proteins, DNA, and mRNA), the cancer exosomes are released into the extracellular space.