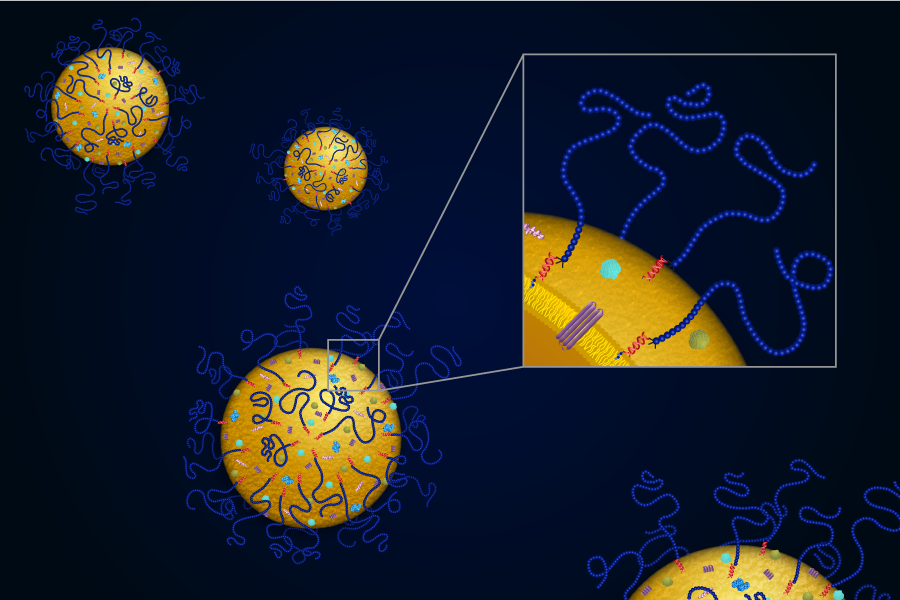 An international team of scientists led by Carnegie Mellon University researchers has engineered novel hybrid exosomes with polymer surfaces that can be used to precisely and consistently deliver therapeutics. The research has been published online by the Proceedings of the National Academy of Sciences (PNAS) and will appear in the January 12 issue of the journal.

The genesis of this research came over drinks several years ago, according to Sushil Lathwal, a postdoctoral researcher at MIT who received his Ph.D. in chemistry from Carnegie Mellon’s Mellon College of Science this year, and Saigopalakrishna “Sai” Yerneni, a current biomedical engineering doctoral student in the College of Engineering. Yerneni had been working on understanding cell-to-cell communication and developing synthetic exosomes, miniscule extracellular vesicles that can transport a variety of cargo throughout the body, from cell to cell like mail carriers.

“What is unique about these ‘postmen’ is that they are optimized to travel in the body without attracting undue attention from the immune system, making them an ideal drug delivery vehicle,” Yerneni said.

In recent years, scientists have been working to harness these natural nanoparticles to deliver therapeutics, such as cancer drugs. However, natural exosomes are very unstable in storage and when circulating in the body, limiting their potential effectiveness for medical uses.

That’s where Lathwal came in.

In his research, Lathwal had been working on automating the synthesis of polymer biohybrids using atom transfer radical polymerization (ATRP), the groundbreaking and robust method of controlled polymerization developed by J.C. Warner University Professor of Natural Sciences Krzysztof Matyjaszewski in 1994.

“As we were watching the bubbles in our beer that resembled exosomes that night, we thought ‘could we combine polymer chemistry with exosomes to create a unique class of exosome-polymer hybrids for drug delivery applications?'” Lathwal said. That idea sparked a collaboration that came to involve researchers from the Mellon College of Science, the College of Engineering and institutions in three other countries.

The latest research from this scientific team builds on work published last year in the journal ACSNano, which demonstrated the creation of an “all-purpose platform” for easily producing synthetic exosomes with a DNA-cholesterol tether that could be used to carry a wide variety of cargo to cells. In their PNAS study, the researchers harnessed the power of ATRP to create exosomes with thousands of polymer chains on their surfaces, known as exosome polymer hybrids. These biocompatible surface polymers serve as a protective shell for the exosome, making them more stable.

“We were able to improve the shelf life of exosomes from weeks to months,” Yerneni said. “But more importantly, we increased their circulation time in the blood by several fold to provide them enough time to reach the target tissue.” While native exosomes are cleared from blood circulation in three hours, exosome-polymer hybrids remain in circulation 12 hours post-injection.

“Creating exosome-polymer hybrids is the first step towards addressing some major challenges with using exosomes as drug-delivery vehicles,” Lathwal said; however, the pair note that much more work needs to be done before they can find their way into medical treatments.

“Researchers still need to work out how exosomes are synthesized by cells and why they are so effective at infiltrating cells and evading immune detection,” Yerneni said. “Only after they answer these basic questions will this new mode of drug delivery be ready for clinical application.”