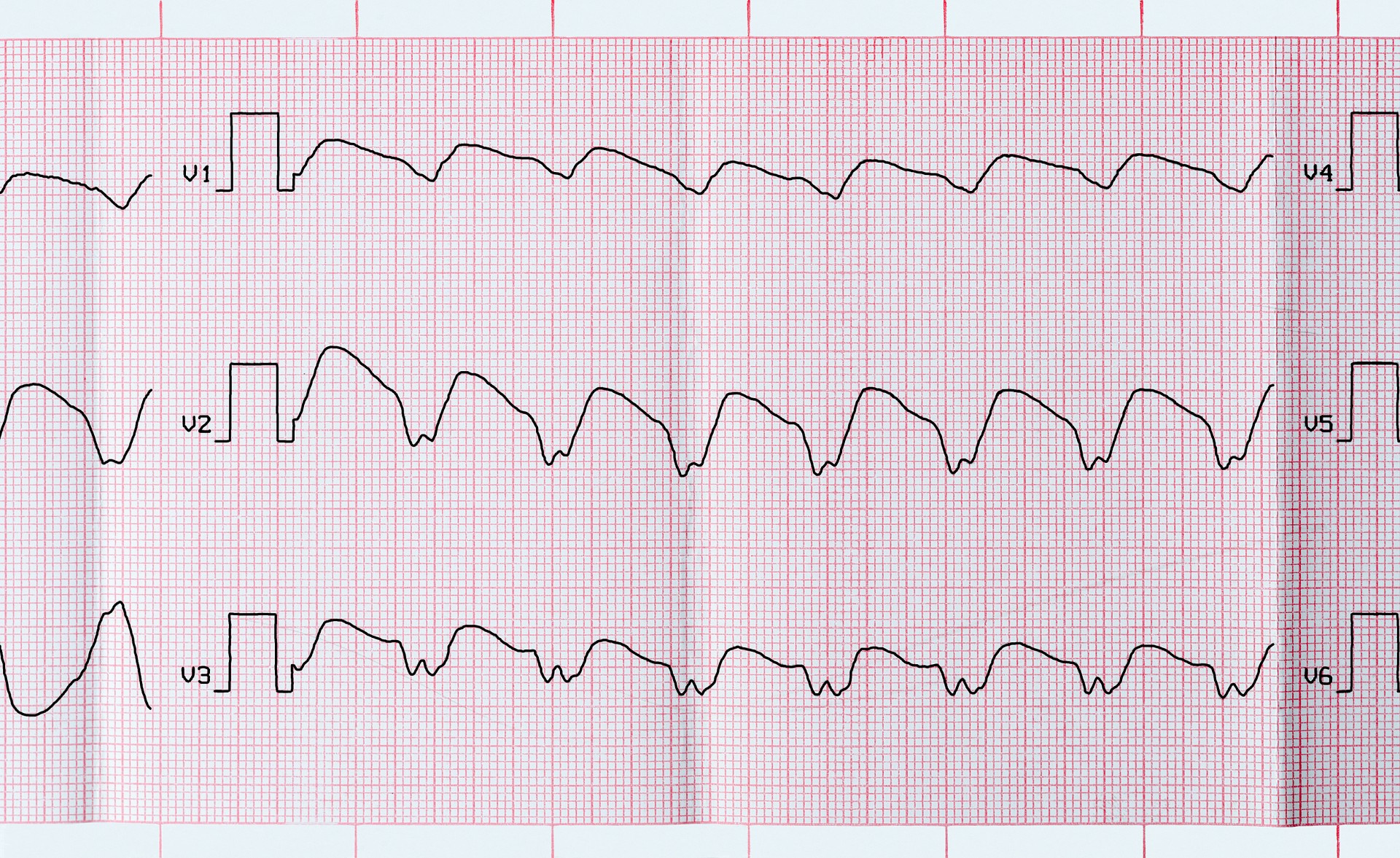 Ventricular tachycardia, revealed in this printout of a electrocardiogram, is a type of abnormal heart rhythm, or arrhythmia, that occurs when the heart’s lower chambers beat too fast. Photo by Getty.

Vesicles secreted from human heart cells may repair damaged tissue and prevent lethal heart rhythm disorders, according to a new study from investigators in the Smidt Heart Institute at Cedars-Sinai.

The research, published in the European Heart Journal, could lead to a new way to treat a heart rhythm problem called ventricular arrhythmia—a top cause of sudden cardiac death. In an accompanying editorial, experts describe the research as “poised to turn this entire field on its head.”

Ventricular arrhythmia­s can occur after a heart attack damages tissue, causing chaotic electrical patterns in the heart’s lower chambers. The heart ends up beating so rapidly that it cannot support the circulation, leading to a lack of blood flow and, if untreated, death.

Current treatment options for ventricular arrhythmia­s caused by heart attacks are far from ideal. These include medications with major side effects, implanted devices to provide an internal shock, and a procedure called radiofrequency ablation in which parts of the heart are purposely destroyed to interrupt disruptive electrical signals. Recurrence rates are, unfortunately, high for all of these.

“Ablation is a counterintuitive approach because you are destroying heart muscle in an already weakened heart,” said Eugenio Cingolani, MD, director of the Cardiogenetics-Familial Arrhythmia Program at the Smidt Heart Institute at Cedars-Sinai, and senior author of the study. “We asked ourselves, ‘What if instead of destroying damaged tissue, we tried to repair it?’”

With that in mind, the team sought to try a different approach in laboratory pigs that experienced a heart attack. They injected some of the laboratory pigs with tiny, balloon-like vesicles, called exosomes, produced by cardiosphere-derived cells (CDCs), which are progenitor cells derived from human heart tissue. Exosomes are hardy particles containing molecules and the molecular instructions to make various proteins, thus they are easier to handle and transfer than the parent cells, or CDCs.

CDCs were first developed and characterized by Eduardo Marbán, MD, PhD, executive director of the Smidt Heart Institute at Cedars-Sinai and the Mark S. Siegel Family Foundation Distinguished Professor. They have been used in multiple clinical trials for a variety of diseases, most recently Duchenne muscular dystrophy.

One group of pigs received an injection of CDC-derived exosomes in their hearts and the other a placebo.

“The exosomes reduced the amount of scar tissue formed in the injured regions of the heart, normalizing the rhythm without weakening the heart,” said Dr. Marbán, who is a co-author on the study.

The animals were evaluated by MRI and tests to assess electrical stability of the heart. Four to six weeks after injection, the laboratory pigs that had received the exosome therapy showed markedly improved heart rhythms and less scarring in their hearts.

In an editorial published in the same issue of the European Heart Journal, Marine Cacheux, PhD, and Fadi G. Akar, PhD, both of Yale University, summarize the pros and cons of various experimental gene- and cell-based approaches being studied for cardiac arrhythmias.

Cedars-Sinai investigators “appear to have successfully combined the best features of cell and gene therapies to address a major unmet clinical need,” according to Cacheux and Akar. The authors note the approach used by Cedars-Sinai is novel in how it seeks to repair scarring in the heart, and describe the study as “a paradigm-shifting body of work.”

“More studies are needed to to know if the benefits observed in this study persist over a longer period of time,” said James F. Dawkins, DVM, a research scientist at Cedars-Sinai and first author of the study, “however, these preliminary results suggest the possibility for a nondestructive alternative to treating ventricular arrhythmias.”