Cells for Cells, a cell therapy developing company, today announced the publication of new data of its OxiumTMEXO cell culture media for increased exosome production in Frontiers in Biotechnology and Bioengineering, a specialized journal of the field. The company is part of REGENERO, the Chilean consortium for regenerative medicine.

There is an urgent need for technological advancements in the biomanufacturing of exosome for their clinical use. In a head-to-head comparison, OxiumTMEXO outmatched the standard DMEM (starvation protocol) and a commercially available medium for exosome production. OxiumTMEXO allowed different type of cells, including the broadly used mesenchymal stem cells, to increase by 3-folds their particle production. A significant enrichment in the exosome fraction was measured under this condition.  The isolated exosomes expressed the typical pan markers while preserving their functionality both in vitro and in vivo.

“OxiumTMEXO unlocks the upstream manufacturing bottleneck of exosome production. By reducing production time and cost by half, this could bring exosome therapy one step forward on the translational track” comments Dr. Maroun Khoury, Chief Scientific Officer at Cells for Cells and REGENERO.

Yet, other bioprocess hurdles are still to be bypassed, including the inefficient purification of clinical-grade exosomes, a problem that is currently being tackled by different companies through novel isolation platforms.

The cells tested in the published work correspond to mesenchymal stem/stromal cells from different tissue origins. Fibroblasts were also used as a non-stem cell type. Interestingly, OxiumTMEXO allowed a higher particle production independently of the cell type and tissue origin.

“We observed a very low donor and batch variation of the secretion pattern. This offers an attractive alternative for GMP-compliant and scalable exosome production” says Dr. Francisca Alcayaga, principal investigator at Cells for Cells-REGENERO.

The reproducibility and accuracy of OxiumTMEXO results were corroborated through additional testing by 3 independent and international laboratories. Cells for Cells is looking forward to partner with researchers and manufacturers interested in OxiumTMEXO.

Characterization of UC-MSCs cultured in DMEM, OxiumTMEXO, and commercial medium for sEV production 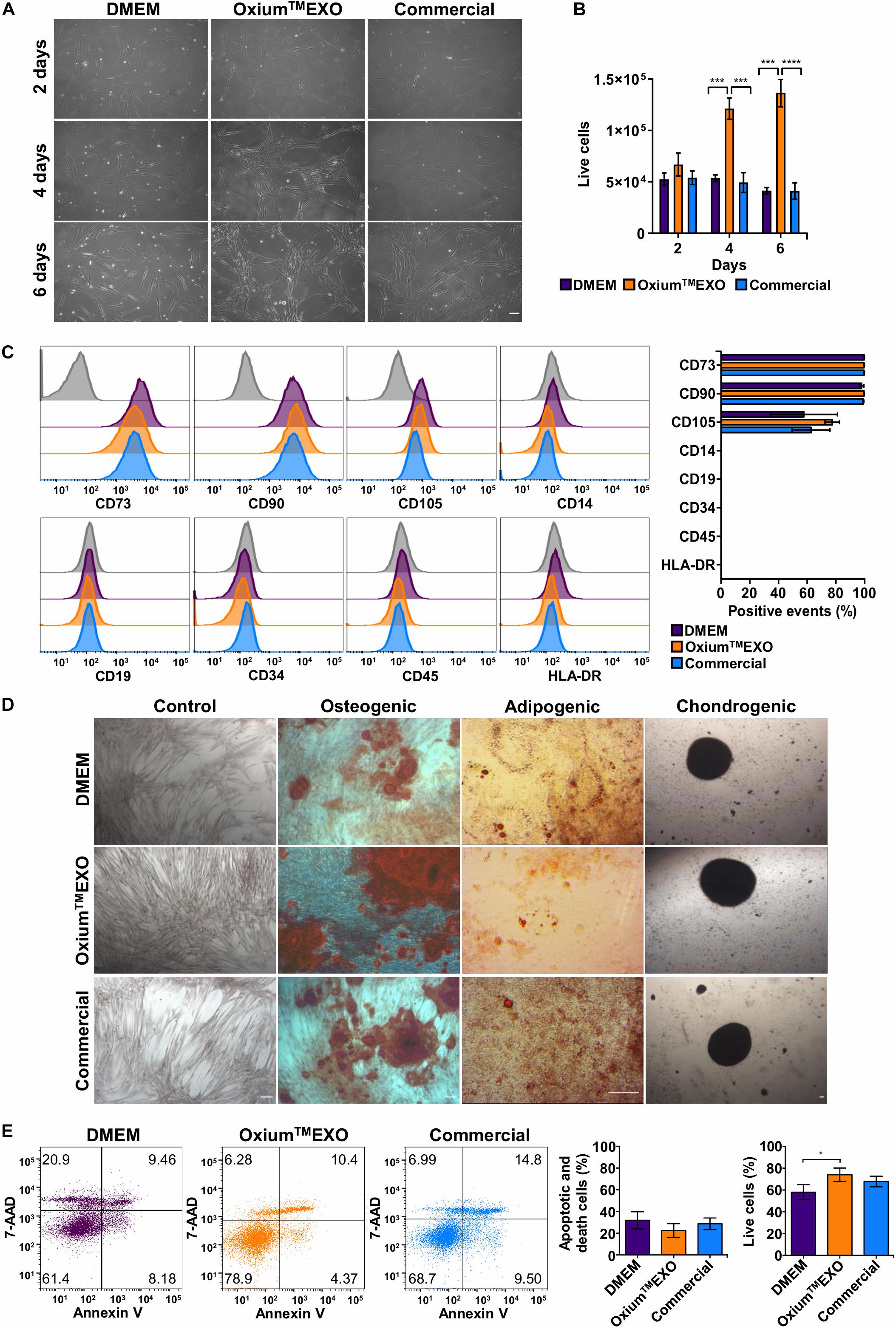 Umbilical cord-derived mesenchymal stromal cells (UC-MSCs) were evaluated at 2, 4, or 6 days post-induction of sEV secretion with DMEM, OxiumTMEXO, and commercial medium. (A) Microscope images showing cell morphology at the different days post-induction, acquired with an Olympus CKX41 microscope using 10× magnification (scale bar 100 μm). (B) After 2, 4, and 6 days post-induction, live cells were counted with the Neubauer chamber. **P < 0.01, ****P < 0.0001, two-way ANOVA, followed by Tukey’s comparison test. (C) Flow cytometry analysis of MSCs’ classical surface and purity-control antigens at 6 days post-induction. Histograms of fluorescence intensity for each marker assayed are shown; gray histograms correspond to unstained cell control for each marker. Quantification of positive events for each marker is shown in terms of percentage of total events. (D) Multilineage differentiation capacity of UC-MSCs previously cultured for 6 days in the different induction media. Representative images are shown. (E) Detection of apoptosis and cell death according to Annexin V/7-AAD staining and its quantification 6 days post-induction. A representative dot plot is shown for each condition. The graphs show mean ± SEM, n = 6. *P < 0.05, One tailed t-student.