Researchers at University of California San Diego School of Medicine say tiny micro-vesicle structures used by neurons and other cells to transport materials internally or dispose of them externally carry tell-tale proteins that may help to predict the likelihood of mild cognitive impairment (MCI) developing into full-blown Alzheimer’s disease (AD).

The findings, published online this week in the journal Alzheimer’s & Dementia, represent a quicker and less invasive way to identify impending cognitive decline and begin treatment before progression to established, irreversible dementia.

“MCI is often a transitional stage between normal aging and dementia,” said senior author Robert A. Rissman, PhD, associate professor in the Department of Neurosciences at UC San Diego School of Medicine, director of the Biomarker Core for the Alzheimer’s Disease Cooperative Study (ADCS) and director of the Neuropathology Core and Brain Bank for the UC San Diego Shiley-Marcos Alzheimer’s Disease Research Center. “It’s associated with more minor cognitive impairment and carries an increased risk of developing Alzheimer’s dementia.”

MCI patients progress to AD at rates as high as 10 to 15 percent per year, prompting an increased emphasis upon diagnosing MCI early and developing treatments that can delay or prevent conversion to AD. The need is underscored, write the authors, by the fact that clinical trials of treatments for established AD have thus far failed.

While clinically distinguishable from normal aging and AD, MCI remains nonetheless a complex condition with many and varied causes. “That has prompted great interest in pinpointing underlying biomarkers that can predict the conversion from MCI to AD dementia,” said Rissman. “Finding such biomarkers would also identify persons most likely to be responsive to preventive treatments.”

Currently, the accepted methods for diagnosing preclinical AD patients is to detect protein biomarkers found in cerebrospinal fluid (CSF), in combination with advanced neuroimaging and neuropsychological testing. But CSF sampling involves an invasive, often painful, process. Neuroimaging is expensive. Neuropsychological testing is time-consuming and can often vary from visit to visit.

The new method described in the Alzheimer’s & Dementia study evaluated the potential of exosomes – extremely small vesicles or sacs found in most cell types, including neurons. Exosomes are thought to move materials inside cells and are used to dump cellular trash into the bloodstream for disposal. In the case of disease, Rissman’s group predicted that neuronal derived exosomes (NDEs) would carry damaged or excess proteins and metabolites out of brain cells, among them amyloid and tau biomarker proteins that are strongly associated with AD.

The researchers harvested NDEs from human blood plasma of 60 patients who participated in an 18-month ADCS clinical trial that enrolled MCI patients only. Some of these MCI patients converted to AD over the course of the study and some did not. Rissman’s lab also gathered samples from control patients and samples from known AD patients. They enriched the NDE content of those originating from neurons. The samples represented patients with normal cognitive function, diagnoses of stable MCI and stable AD and patients who had recently transitioned from MCI to AD.

After characterizing NDEs by size, shape and concentration, the researchers compared that data with the different patient cohorts. They found that NDEs carried targeted biomarker proteins, which have previously been found to predict development of AD up to 10 years before onset of clinical symptoms, and correctly distinguished 100 percent of patients with AD from normal cohorts.

Plasma NDEs derived from stable MCI and ADC patients are similar
in size and shape to previously reported exosome preparations. 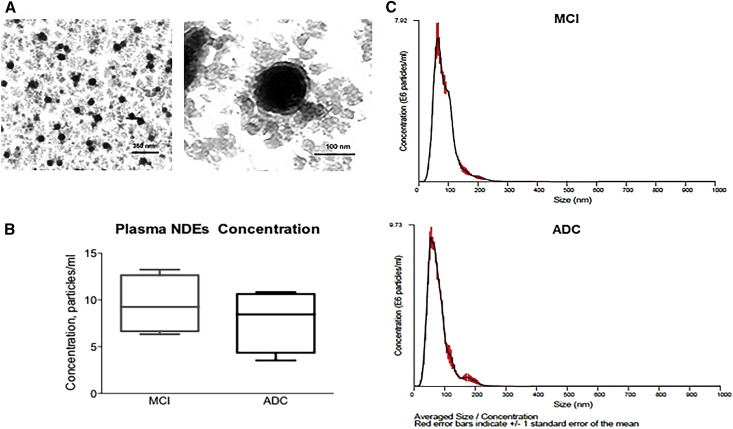 Moreover, the researchers showed for the first time that plasma NDEs from AD and MCI patients may propagate tau tangles in the brains of normal mice similar to what is seen in human AD brains. The fact that these NDEs could induce pathological-like structures in “naïve” mice (animals not previously subjected to experiments) suggests that the contents of NDEs are bioactive, said Rissman. It also suggests that released NDEs can be taken up by cells, raising the possibility of NDEs potential for drug delivery.

The development of blood-based biomarkers for AD (and other neurodegenerative diseases) diagnostics could significantly improve the effectiveness and reliability of patient care and future research, said the authors, who encouraged further studies to refine and validate the approach.