Extracellular vesicles (EVs), which include exosomes and ectosomes/microvesicles, have emerged as important intercellular regulators. EVs can interact with surface receptors of target cells and can transport luminal components, including messenger RNAs (mRNAs), microRNAs, and enzymes, to the cytosol of the target cell.

Here, researchers from the University of Florida College of Dentistry show that hematopoietic cells grown in culture shed exosome-like EVs as they differentiate from preosteoclasts into osteoclasts. These EVs were between 25 and 120 nm (mean, 40 nm) in diameter determined by transmission electron microscopy. The exosome-associated markers CD63 and EpCAM were enriched in the isolated EVs while markers of Golgi and endoplasmic reticulum were not detected. Treatment of isolated hematopoietic cells with EVs did not affect their receptor activator of nuclear factor κB-ligand (RANKL)-stimulated differentiation into osteoclasts. However, EVs from osteoclast precursors promoted 1,25-dihydroxyvitamin D3-dependent osteoclast formation in whole mouse marrow cultures, and EVs from osteoclast-enriched cultures inhibited osteoclastogenesis in the same cultures. 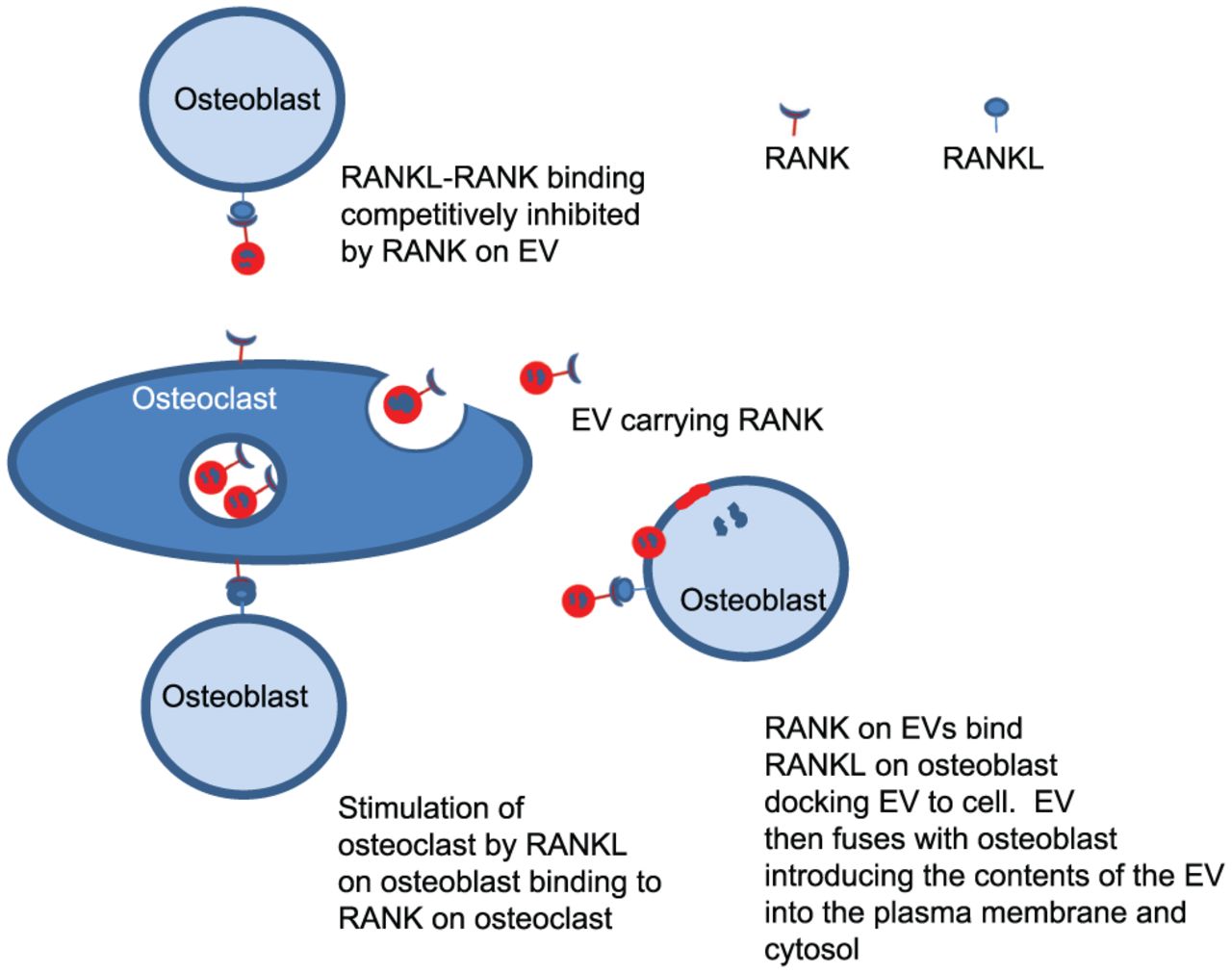 Receptor activator of nuclear factor κB–ligand (RANKL) on the surface of osteoblasts and other cells binds RANK on the surface of osteoclasts to stimulate osteoclastogenesis and bone resorption (bottom of osteoclast). RANK-rich EVs (red) are released from osteoclasts and may interact with RANKL on osteoblasts to competitively inhibit RANKL binding to RANK on osteoclasts (top of osteoclast). The RANK-RANKL binding interaction may target EVs to RANKL-containing cells (right of osteoclast). The bound EVs may subsequently fuse with the targeted cell delivering membrane elements and luminal components. This could occur either at the plasma membrane (as depicted) or after EVs are internalized into vesicular compartments.

The researchers demonstrated for the first time that EVs released by osteoclasts are novel regulators of osteoclastogenesis. These data suggest that RANK in EVs may be mechanistically linked to the inhibition of osteoclast formation. RANK present in EVs may function by competitively inhibiting the stimulation of RANK on osteoclast surfaces by RANKL similar to osteoprotegerin. RANK-rich EVs may also take advantage of the RANK/RANKL interaction to target RANK-rich EVs to RANKL-bearing cells for the delivery of other regulatory molecules.