Muller Fabbri, MD, PhD, of the Children’s Center for Cancer and Blood Diseases at Children’s Hospital Los Angeles, has been awarded $1.9 million by the National Cancer Institute of the NIH to further his research on neuroblastoma – the third most common type of childhood cancer.  The research will focus on a completely new strategy targeting immune cells that contribute to disease progression with a goal toward the development of more potent immunotherapies to improve the outcomes for children with this disease. 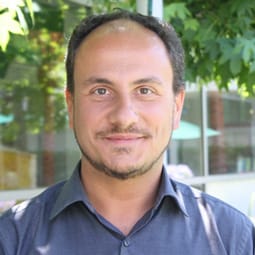 Neuroblastoma (NB) is a type of solid tumor that starts in immature nerve cells of the sympathetic nervous system. While NB is one of the most common types of pediatric cancer, it is still very rare. Out of the 13,000 children who are diagnosed with cancer each year, only about 650-700 are diagnosed with NB. The disease primarily occurs in children younger than age 10 and is most common in infants and very young children.

As principal investigator of the project, Fabbri will study how microRNA (small molecules that regulate gene expression) contained in the exosomes of immune cells known as Tumor-Associated Macrophages (TAMs) contribute to disease progression and result in the development of NB resistance to chemotherapy. His goal is to identify new molecular targets to prevent and overcome the development of cancer resistance to treatment, which is the main obstacle in the treatment of NB and other types of cancers.

Within the environment where tumors grow, metastasize and develop resistance to treatment, there is a lot of communication between the cells. Exosomes – which are like envelopes carrying cargo of microRNA – are involved in this inter-cellular communication by shuttling messages between neuroblastoma cells and TAMs, the neighboring white blood cells that are part of the immune system.

“We are really 180° apart from what researchers previously believed – that the immune cells are always defending us– it turns out that they can receive signals from cancer cells and become the best allies of cancer,” explains Fabbri, who is also an assistant professor of pediatrics at the Keck School of Medicine of USC. “Now that we know that this happens, the goal is to interrupt communication between the cancer cells and the immune cells, so that the immune cells do not forget what they’re supposed to do — which is to fight against cancer and not help it.”

Other members of the research team include Shahab Asgharzadeh, MD, and Richard Sposto, PhD, of the Children’s Center for Cancer and Blood Diseases at Children’s Hospital Los Angeles. Sposto is also Director of the Biostatistics and Bioinformatics Core.