Roughly one in every 1,000 individuals worldwide suffers from a ciliopathy. Symptoms include visual impairment, loss of hearing, obesity, kidney diseases, intellectual disabilities, and many other – in some cases serious – disorders, which can also occur simultaneously. No treatment is currently available, so that it is only possible to manage the accompanying problems by providing, for example, kidney transplants.

“It is only some 20 years ago that we discovered the prominent role of primary cilia in this connection. Their  malfunctioning is responsible for various inherited disorders that we call ciliopathies,” explained Professor Helen May-Simera of Johannes Gutenberg University Mainz (JGU).

The biochemist conducts research on Bardet-Biedl syndrome (BBS), one of the most severe ciliopathies. Her team has now discovered that signals from defective cilia can aggravate patients’ condition.

Faulty primary cilia cause a range of symptoms

Primary cilia are tiny, eyelash-like projections extending from the surface of cells. Almost every cell in the human body has a cilium, but defects in these protrusions do not necessarily result in serious problems in all tissues. However, because they are omnipresent on all kinds of cells, an associated deficiency can affect many different organs and tissues, thus leading to a wide range of potential symptoms. In the past, it was often not possible to assign the cause of the various related syndromes to ciliopathies. Thanks to developments in genetic diagnoses, it is now easier to identify ciliopathies as the underlying problem in certain hereditary diseases.

Bardet-Biedl syndrome affects one in every 25,000 persons among the global population and is thus relatively rare. At the same time, it is considered to be an archetypal ciliopathy because of its multifarious effects.

Because of its complexity, BBS represents a valuable model when it comes to fundamental research and the associated generation of suitable therapeutic agents as the results should be applicable to other forms of ciliopathy.

“Once we have understood how this model system works, we should be able to understand other ciliopathies as well,” emphasized May-Simera.

Cilia control the communication between cells

“It was long thought that primary cilia were vestigial organelles and thus redundant. But we now know that these tiny structures are responsible for many cellular processes. Cilia actually regulate intercellular communication,” explained the biochemist.

Disorders result when cilia do not work properly. They act as antennae for cells and receive incoming signals. May-Simera’s research group has been able to demonstrate for the first time that cilia in mammals are not only there to capture signals but also to transmit biologically relevant signals to other cells.

“In this connection, cilia regulate the release of small, fluid-filled sacs called extracellular vesicles. These contain bioactive signals that are picked up by the receiving cells, where they control downstream cellular processes. At present, we do not really understand exactly how this works.”

May-Simera compares the process to a postal system in which little packages are sent from one cell to another. When the packages arrive, they are unpacked and the contents trigger other actions in the receiving cells. To date, there had only been evidence that the cilia of algae and other primitive lifeforms produced such signals. 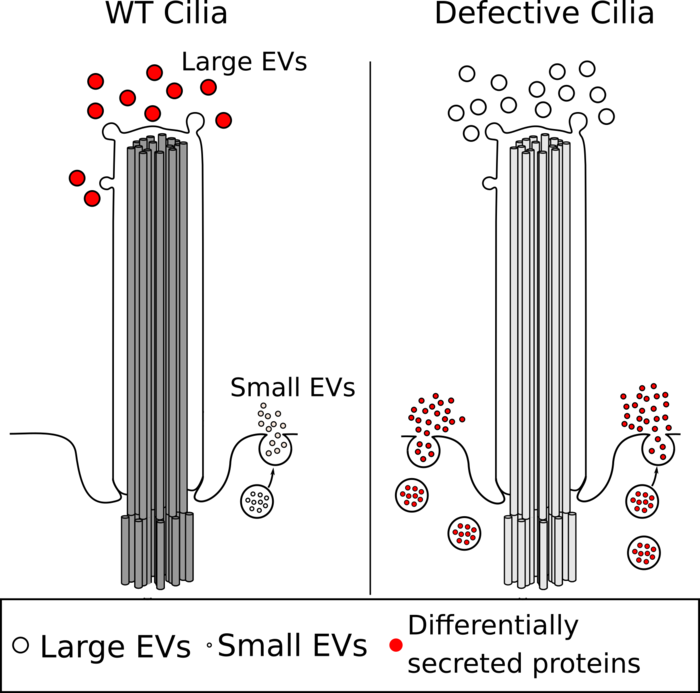 Dr. Helen May-Simera’s team has now been able to demonstrate that this also happens in the case of mammalian renal cells. In addition, the researchers discovered that impaired cells secrete almost four times as many smaller vesicles as healthy cells. When these little vesicles arrive at the receiver cells, they precipitate mechanisms that lead to an exacerbation of defects.

Kidney cells are particularly suitable for this kind of research because renal disorders are the most common symptom in BBS and are furthermore the main cause of mortality in this patient group.

Successful cooperation with other biology teams

“We have even found microRNA, very short segments of RNA that are involved in gene regulation, in the tiny vesicle packages,” added Professor René Ketting of the Institute of Molecular Biology (IMB), who was also involved in the project.

The current hypothesis is that it is microRNA that regulates the correct sequence of the signal chain within cells.