Circular RNAs (circRNAs) are a novel class of noncoding RNAs present in all eukaryotic cells investigated so far and generated by a special mode of alternative splicing of pre-mRNAs. Thereby, single exons, or multiple adjacent and spliced exons, are released in a circular form. CircRNAs are cell-type specifically expressed, are unusually stable, and can be found in various body fluids such as blood and saliva.

Researchers at Justus Liebig University of Giessen analysed circRNAs and the corresponding linear splice isoforms from human platelets, where circRNAs are particularly abundant, compared with other hematopoietic cell types. In addition, they isolated extracellular vesicles from purified and in vitro activated human platelets, using density-gradient centrifugation, followed by RNA-seq analysis for circRNA detection. The researchers could demonstrate that circRNAs are packaged and released within both types of vesicles (microvesicles and exosomes) derived from platelets. Interestingly, they observed a selective release of circRNAs into the vesicles, suggesting a specific sorting mechanism. In sum, circRNAs represent yet another class of extracellular RNAs that circulate in the body and may be involved in signalling pathways. Since platelets are essential for central physiological processes such as haemostasis, wound healing, inflammation and cancer metastasis, these findings should greatly extend the potential of circRNAs as prognostic and diagnostic biomarkers. 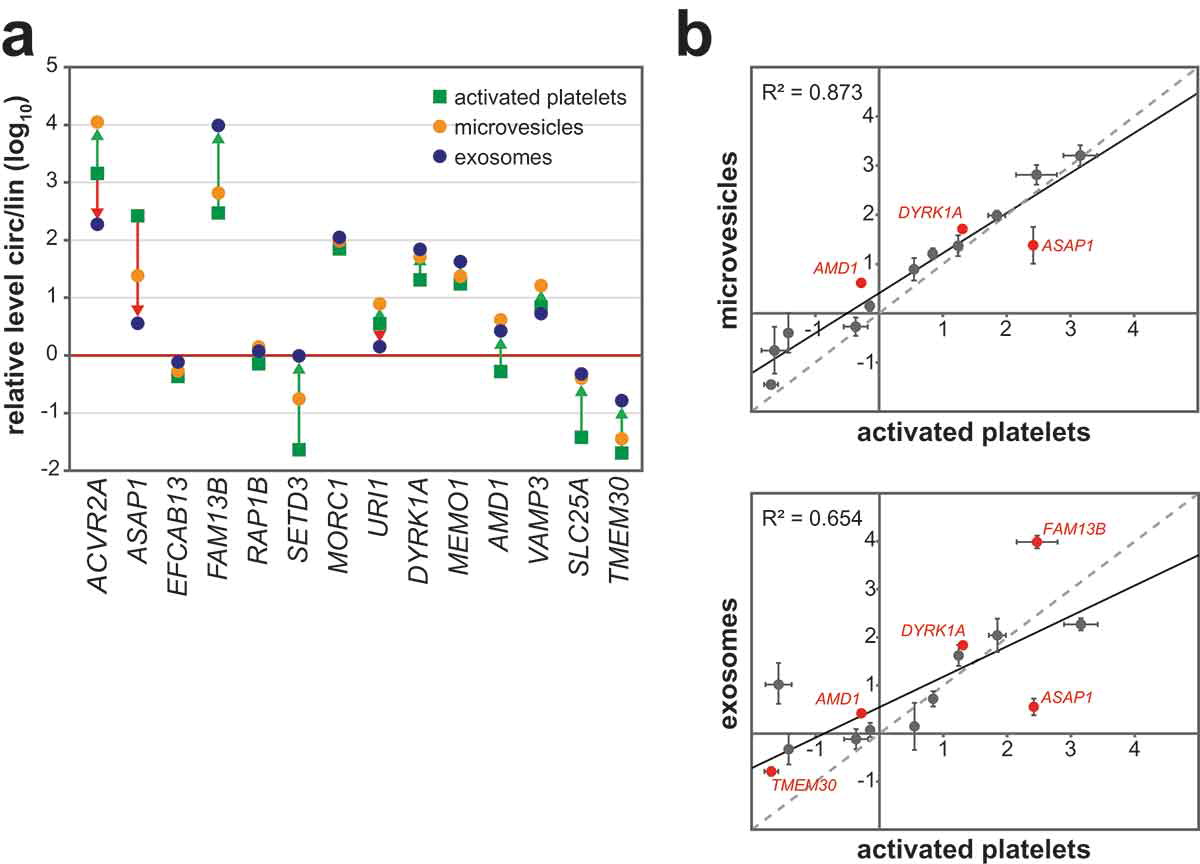 (a) The relative levels of corresponding circular and linear isoforms are shown, as determined by RT-qPCR for 14 targets, comparing activated platelets, microvesicles, and exosomes. Only mean values of two replicates are given (for replicate data, see panel b) (b) The relative circ/lin levels (as in panel a) are plotted for microvesicles and exosomes (Y-axis), each compared with activated platelets (X-axis). The fitted regression line and coefficient of determination R2are indicated. CircRNAs preferentially released into EVs or preferentially retained in platelets are plotted in red.