Extra-cellular components, such as serum and exosome, have drawn great attention as a readily accessible source of biomarkers for mammalian health. However, the contribution of different blood components to the signature of respective microRNAs (miRNAs) remains unknown, especially in cattle. In this study we aimed to investigate the miRNAs from bovine sera and exosomes, and to provide insights into their future applications.

University of Alberta researchers collected blood from four healthy dairy cows for use in this study. The serum and exosomal RNAs were extracted using two commonly used commercial kits (Norgen and Invitrogen total RNA isolation kit), respectively. The miRNA profiles were then generated using RNA-seq. Sera had higher complexity of miRNAome consisting of 328 ± 17 miRNAs, while less number of miRNAs (260 ± 15, P = 0.001) was detected in exosomes. The profile of total detected miRNAs in sera and exosomes was different, while exosomes represented about 78 % of total miRNAs expressed in sera, suggesting that exosomes are the major miRNAs carriers in bovine sera. A total of 24 and 3 miRNAs (RPM > 5) were exclusively expressed in sera and exosomes, respectively. In addition, 12 miRNAs were differentially expressed between sera and exosomes (FDR < 0.05), with the expression of four of them being further validated by stem-loop RT-qPCR. Moreover, functional analysis showed that uniquely and highly expressed miRNAs in sera were mainly related to diseases and disorders, while the predicted functions of those in exosomes were enriched in tissue development and lipid metabolism. 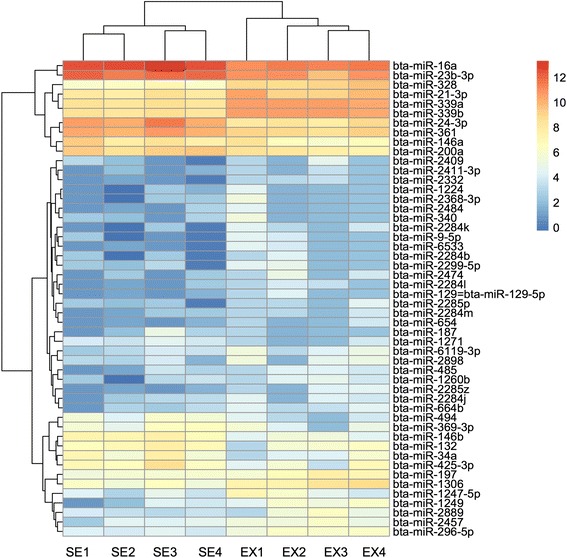 Heatmap generated by clustering of the 50 most variable miRNAs in sera (SE) and exosomes (EX) from four cattle. Colors represent different normalized sequencing reads number as indicated by the color bar (Log2RPM)

These results provide evidence that bovine sera and exosomes miRNAomes are different with regarding to the miRNA numbers, types and expressions. Based on their distinct profiles, miRNAs from sera and exosomes may reflect different aspects of physiological and pathological conditions in cattle. The functional analysis suggest that sera may be preferable for the purpose of detecting inflammation in cattle, while exosomes may be a better choice for monitoring the status of muscle development and lipid metabolism.