University of Lyon researchers have determined the lipid, protein and miRNA composition of skeletal muscle (SkM)-released extracellular vesicles (ELVs) from Ob/ob (OB) vs wild-type (WT) mice. The results showed that atrophic insulin-resistant OB-SkM released less ELVs than WT-SkM, highlighted by a RAB35 decrease and an increase in intramuscular cholesterol content. Proteomic analyses of OB-ELVs revealed a group of 37 proteins functionally connected, involved in lipid oxidation and with catalytic activities. OB-ELVs had modified contents for phosphatidylcholine (PC 34-4, PC 40-3 and PC 34-0), sphingomyelin (Sm d18:1/18:1) and ceramides (Cer d18:1/18:0) and were enriched in cholesterol, likely to alleviated intracellular accumulation. Surprisingly many ELV miRNAs had a nuclear addressing sequence, and targeted genes encoding proteins with nuclear activities. Interestingly, SkM-ELV miRNA did not target mitochondria. The most significant function targeted by the 7 miRNAs altered in OB-ELVs was lipid metabolism. In agreement, OB-ELVs induced lipid storage in recipient adipocytes and increased lipid up-take and fatty acid oxidation in recipient muscle cells. In addition, OB-ELVs altered insulin-sensitivity and induced atrophy in muscle cells, reproducing the phenotype of the releasing OB muscles. These data suggest for the first time, a cross-talk between muscle cells and adipocytes, through the SkM-ELV route, in favor of adipose tissue expansion. 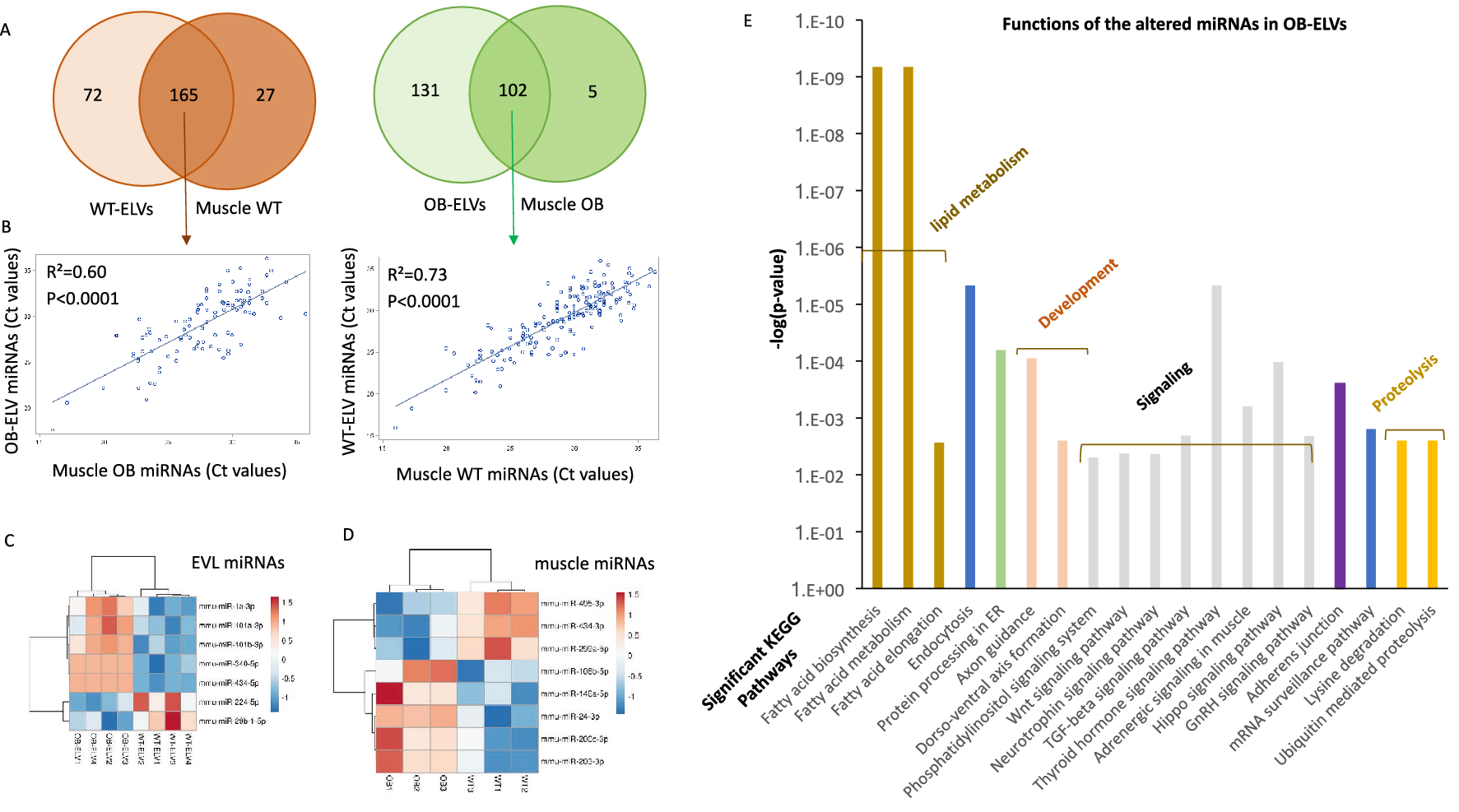 (A) Venn Diagram showing the number of miRNAs commonly expressed between muscle and SkM-ELVs, or specific to each compartment. Given the low number of animals (n = 4) we have considered only the miRNAs expressed in all mice for each diagram. The mean Ct values of all miRNAs expressed in WT or OB muscle was not significantly different. (B) Correlations between the Ct values of miRNAs commonly identified between SkM-ELVs and Quad. (C) Heatmap showing the differentially concentrated miRNAs in SkM-ELVs or muscle (D), between OB and WT mice. (E) The significant KEGG pathways containing target genes from the 7 OB-ELV miRNAs (in C) were determined by using DIANA miRPath. The 20 most significant KEGG pathways in terms of lowest p-values are shown.