Cutting the time on early disease diagnoses with extracellular vesicles

When an individual has cancer, or any number of other diseases, early detection can make a huge difference in the outcome. A research team led by the University of Notre Dame is working to cut the test time for disease biomarkers. The new timeline — 30 minutes instead of 13 hours — uses even smaller sample sizes to offer a new liquid biopsy option.

“Extracellular vesicles contribute to intercellular communication, especially during specific cellular processes such as coagulation or immune responses,” said Hsueh-Chia Chang, co-lead of the study and Bayer Professor of Chemical and Biomolecular Engineering at Notre Dame. “More importantly, we are just now learning that EVs and the microRNA they carry also play a role in disease proliferation. If we can detect them accurately, quickly and cost-effectively, they could very well be the key to early cancer detection.”

Cells secrete EVs, which are easily isolated in bodily fluids such as blood, saliva and even breastmilk.

“What we’ve developed is essentially a microfluidic chip that takes a small amount of blood plasma and analyzes it for a target EV microRNA in about 30 minutes,” said David Go, Rooney Family Associate Professor of Engineering at Notre Dame and a co-lead on the study. “By using a mechanical piezoelectric device to break open the EVs and an electrical device to detect the microRNA, we remove all the inefficiencies associated with purification, extraction and RNA detection using PCR-based approaches — and it’s a lot faster.”

The study, published in Nature Communications Biology, details the screening tool and its performance. The Notre Dame team worked with cancer researchers from the University of Southern California, including Reginald Hill, assistant professor of medicine at the Keck School of Medicine and the Lawrence J. Ellison Institute for Transformative Medicine, and Bangyan Stiles, professor in the USC School of Pharmacy, to test the new device with both human and mouse liver cancer samples, demonstrating its clinical potential.

Design and operation of integrated microfluidic platform for EV-miRNA analysis 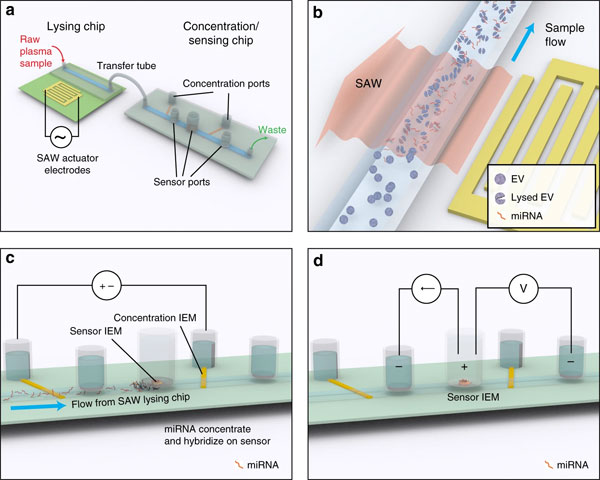 a The device consists of two chips, a lysing chip and concentration/sensing chip, connected by a simple transfer tube such that sample is analyzed under continuous flow. b The principle of lysing using SAWs, where the SAWs refract into the microchannel and generate an acoustic pressure that shears the EVs open. SAWs are induced by 20 interdigitated electrodes on the surface of a 128° YX lithium niobate (LiNbO3) piezoelectric substrate with a polycarbonate microchannel attached to the surface using double-sided Kapton® tape. c The principle of IEM concentration, where a voltage is applied between two reservoirs separated by a CEM, creating an accumulation of negative space charge, including negatively charged miRNA, upstream of the CEM. d The principle of IEM sensing, where an AEM is functionalized with oligo probe complements of a target miRNA. After miRNA hybridization, the current–voltage relationship across the AEM sensor is shifted in the over-limiting region, and the voltage shift (ΔV) can be directly correlated with miRNA concentration

One of the most exciting aspects of the device is that it can be easily extended for other RNA and DNA biomarkers and potentially even proteins. The Notre Dame team has already started exploring other early-detection challenges such as preeclampsia and pancreatic cancer. As they continue to develop the technology, the team aims to offer the first liquid biopsy diagnostic device that is simple, rapid, user-friendly and capable of detecting biomarkers from clinical samples as early in the disease process as possible.

“Such a device could profoundly change how we approach health care and, more importantly, provide a better quality of life,” Chang said. “We believe we are well on our way.”