A second generation of Dex (IFN-γ-Dex) was manufactured with the aim of boosting NK and T cell immune responses. The resesarch team carried out a phase II clinical trial testing the clinical benefit of IFN-γ-Dex loaded with MHC class I- and class II-restricted cancer antigens as maintenance immunotherapy after induction chemotherapy in patients bearing inoperable non-small cell lung cancer (NSCLC) without tumor progression. The primary endpoint was to observe at least 50% of patients with progression-free survival (PFS) at 4 mo after chemotherapy cessation.

Twenty-two patients received IFN-γ-Dex. One patient exhibited a grade three hepatotoxicity. The median time to progression was 2.2 mo and median overall survival (OS) was 15 mo. Seven patients (32%) experienced stabilization of >4 mo. The primary endpoint was not reached. An increase in NKp30-dependent NK cell functions were evidenced in a fraction of these NSCLC patients presenting with defective NKp30 expression. Importantly, MHC class II expression levels of the final IFN-γ-Dex product correlated with expression levels of the NKp30 ligand BAG6 on Dex, and with NKp30-dependent NK functions, the latter being associated with longer progression-free survival. 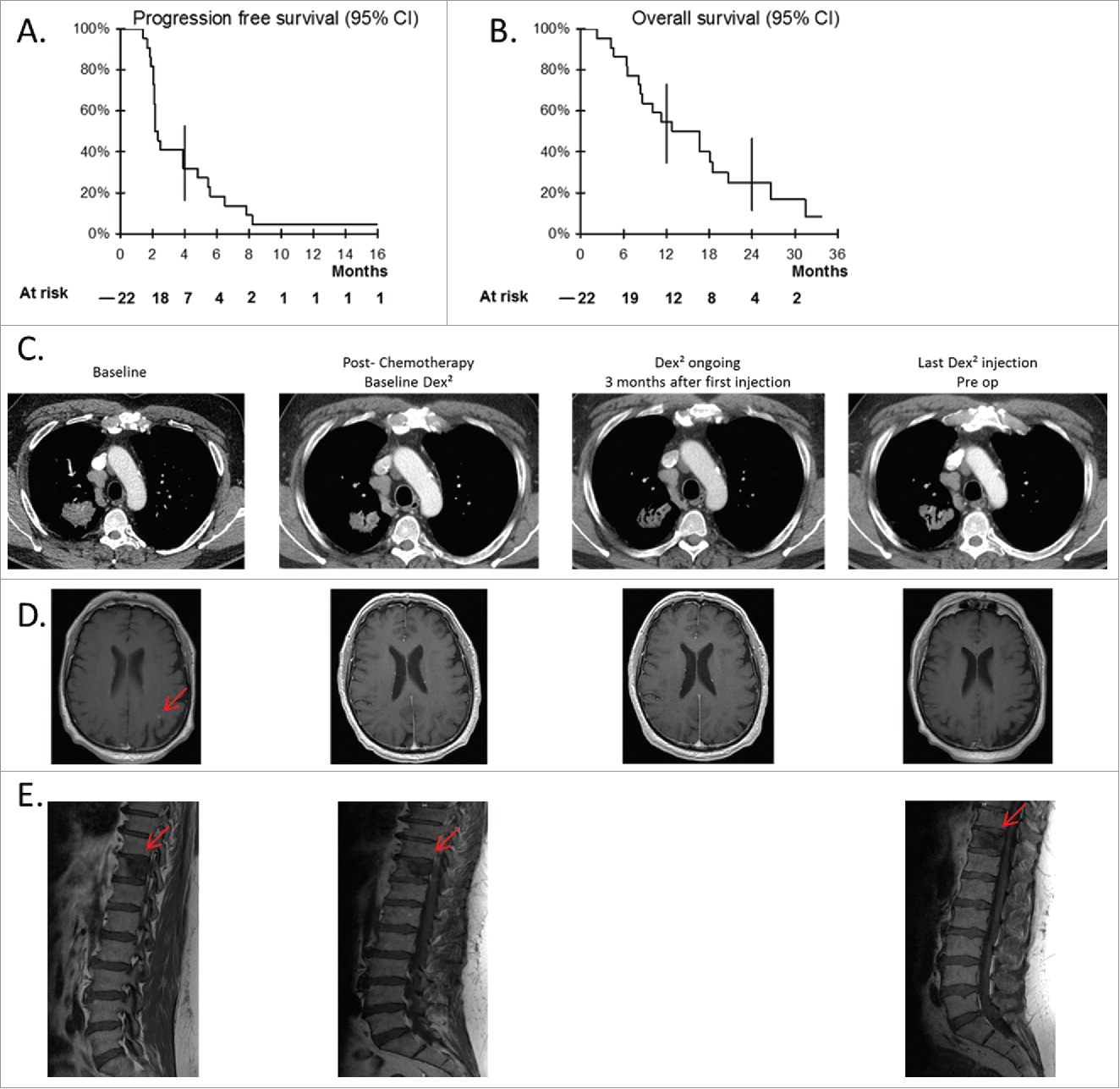 Progression free survival (A), and OS (B) of the cohort of 22 patients recruited into the trial (95% confidence interval). (C–E) Case report of patient 037. Thoracic (C) and brain (D) CT scans as well as a longitudinal follow up by MRI of the 11th dorsal vertebra (E) are shown for the best clinical response obtained in one patient with a stage IV NSCLC. Imaging at baseline (before-chemotherapy), post-chemotherapy (before commencement of Dex injections), at 3 mo after the first Dex injections, and at the last Dex injection before surgery of the thoracic lesion.

This phase II trial confirmed the capacity of Dex to boost the NK cell arm of antitumor immunity in patients with advanced NSCLC.