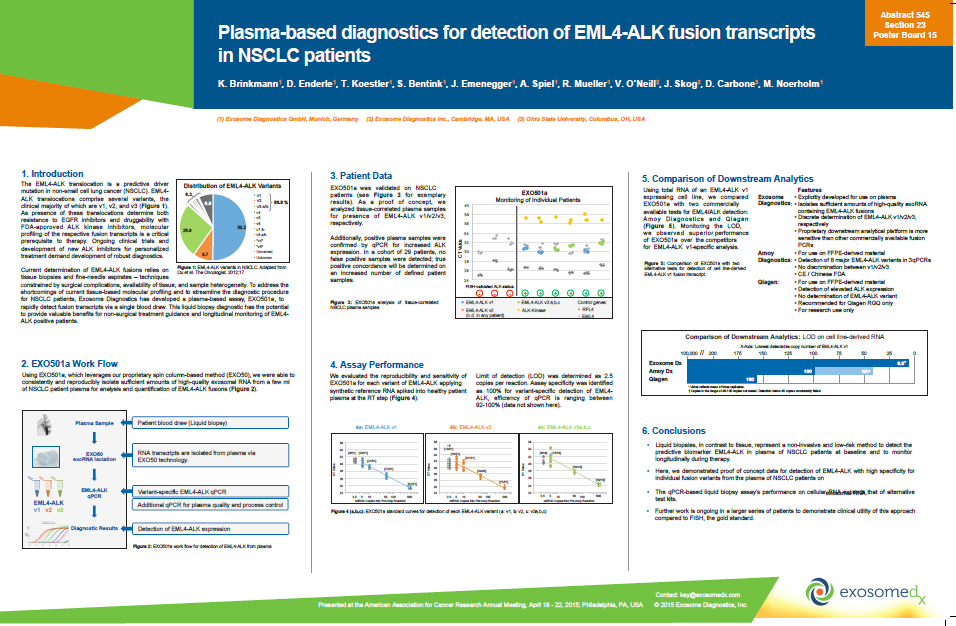 In the study, the Exosome Diagnostics EML4-ALK assay detected all EML4-ALK fusion transcripts based on the presence of the ALK kinase domain; importantly for therapy selection, the assay was able to differentiate between the three major known fusion transcript variants, which represent the vast majority of all EML4-ALK-positive cases. The assay displayed high selectivity over wild type background, and data showed correlation with tissue-based analysis (FISH). Additionally, unlike using circulating tumor cells (CTCs) for liquid biopsy, this test can be performed on either fresh or frozen plasma, and does not require special shipping or storage provisions.

Patients with NSCLC in whom the EML4-ALK mutation is accurately detected can be matched to treatment with approved ALK kinase inhibitors. In addition, there are several other therapies in clinical development currently being evaluated to target this mutation. Exosome Diagnostics’ EML4-ALK liquid biopsy test is designed to be a complement to tissue biopsy or an alternative when proceeding with a tissue biopsy is not desirable or possible. Requiring only a blood draw, the test helps overcome certain challenges associated with tissue biopsies and fine-needle aspirates, including potential surgical complications, availability of tissue, and tissue sample heterogeneity, which can lead to mutations going undetected. Upon completion of further validation studies, Exosome Diagnostics plans to begin making the EML4-ALK liquid biopsy test available to physicians in the second half of 2015.