The differential expression of microRNAs (miRNAs) in plasma of gastric cancer (GC) patients may serve as a diagnostic biomarker. A total of 33 miRNAs were identified through the initial screening phase (3 GC pools vs. 1 normal control (NC) pool) using quantitative reverse transcription polymerase chain reaction (qRT-PCR) based Exiqon panel (miRCURY-Ready-to-Use-PCR-Human-panel-I + II-V1.M). By qRT-PCR, these miRNAs were further assessed in training (30 GC VS. 30 NCs) and testing stages (71 GC VS. 61 NCs).

Researchers at the First Affiliated Hospital of Nanjing Medical University discovered a plasma miRNA signature including five up-regulated miRNAs (miR-185, miR-20a, miR-210, miR-25 and miR-92b), and this signature was evaluated to be a potential diagnostic marker of GC. The areas under the receiver operating characteristic curve of the signature were 0.86, 0.74 and 0.87 for the training, testing and the external validation stages (32 GC VS. 18 NCs), respectively. The five miRNAs were consistently dysregulated in GC tissues (n = 30). Moreover, miR-185 was decreased while miR-20a, miR-210 and miR-92b were increased in arterial plasma (n = 38). However, none of the miRNAs in the exosomes showed different expression between 10 GC patients and 10 NCs. In conclusion, a five-miRNA signature in the peripheral plasma which could serve as a non-invasive biomarker in detection of GC. 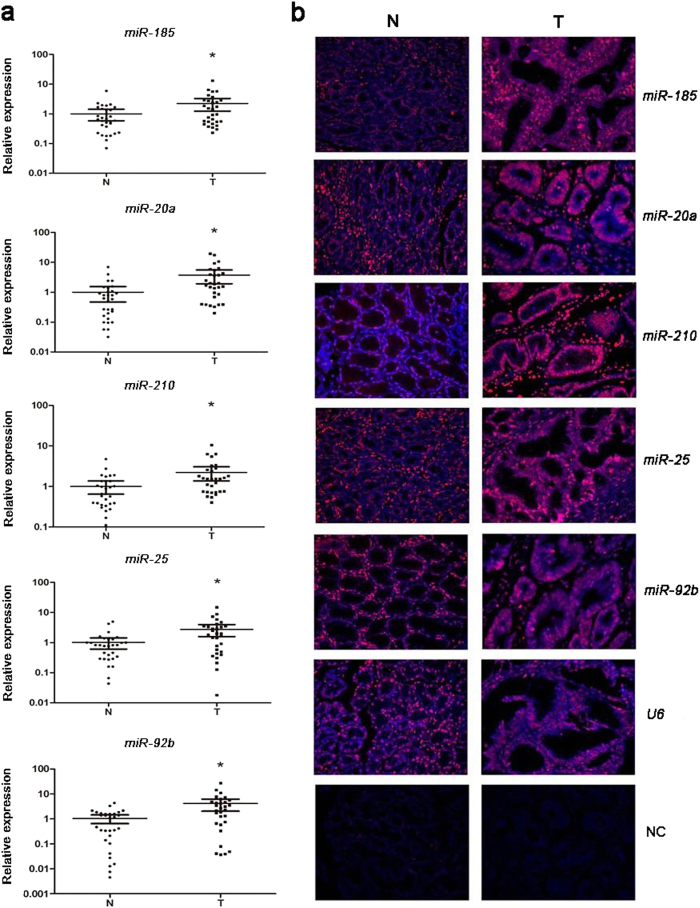 Expression of the five selected miRNAs in the tumor tissues of GC patients.