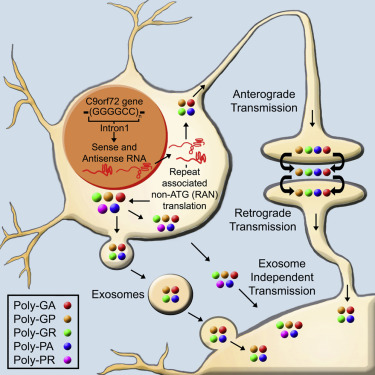 Dipeptide repeat proteins (DPRs) translated from the C9ORF72 expansion spread from cell to cell in vitro, including via exosomes, according to a study in the October 11 Cell Reports. The finding hints at a new mechanism for ALS progression, but questions remain about whether the effect occurs in vivo, and if so, what, if any, pathogenic consequences it produces.

“Cell-to-cell transmission is definitely one of the mechanisms that naturally can contribute to spreading” of C9-related pathology, commented principal investigator Davide Trotti of Thomas Jefferson University in Philadelphia.

Spread of misfolded proteins in neurodegenerative diseases has been a growing theme in recent years, with evidence accumulating that alpha-synuclein, tau, amyloid-beta, huntingtin, SOD1, and TDP-43 can move between cells and induce templated misfolding in the receiving cell (see Dec 2012 news, Jun 2013 news,  Jan 2016 news). This mechanism potentially explains the patterns of neurodegeneration linked with each traveling protein.

In C9ORF72-related ALS, evidence for spread is circumstantial, based on the detection of DPRs in clusters of cells in affected brain regions (Zu et al., 2013). “This could suggest focal points of origin of DPRs, and spread into neighboring cells,” Trotti said, prompting him to ask whether spread could be definitively demonstrated.

To find out, the research team, with first author Thomas Westergard, transfected motor neuron-like NSC34 cells with individual constructs encoding 50-unit dipeptides, tagged with green fluorescent protein. They then exposed the cells to primary cortical neurons, separating the two populations by a sub-micron mesh. After 48 hours, the authors detected DPRs polyGA, polyGR, polyGP, and polyPA, but not polyPR, in the cortical neurons, indicating transmission. No transmission was detected from NCS34 cells transfected with GFP alone. Unlike the other DPRs, PR accumulates exclusively in the nucleus, Trotti said, which may explain why it was less likely to spread between cells.

When the authors transfected cortical neurons themselves with DPR constructs, and then co-cultured them with astrocytes, DPRs, but not GFP alone, were seen in astrocytes after 48 hours. The authors also demonstrated neuron-to-neuron spread, as might occur along neural networks, when they allowed transfected neurons in one chamber to contact non-transfected neurons in a separate chamber through axons growing along microgrooves.

Expanding these findings to human cells, the authors established a similar co-culture system using C9ORF72 ALS patient-derived spinal motor neurons (sMN), which they found to endogenously express the sense strand DPRs GA, GR, and GP. When these C9-sMNs were co-cultured with GFP-expressing control sMNs for 3 weeks, two out of the three sense DPRs (GA and GR) were detectable as aggregates in the GFP-expressing cells.

“We cannot rule out transmission of GP,” Trotti noted, since it may be present in unaggregated form, and thus simply be more difficult to detect.

How did the DPRs move? DPRs could be transferred between cells by conditioned media, which contains exosomes. The team found that exosomes isolated from transfected NSC34 cells contained DPRs, and that exposure of primary cortical neurons to DPR-containing exosomes led to presence of DPRs in the cortical neurons, indicating that exosomes are likely involved in contact-independent transfer. Exosomes have been implicated in spread of other neurodegenerative disease-linked proteins, including prions, but there are no rules of thumb yet for what proteins can and cannot be carried by them, according to Trotti. “We are at the infancy of this field,” he said.

As for other mechanisms which may be at work in DPR transfer, Trotti said that it remains to be seen whether micropinocytosis of cellular debris also plays a role.

“So far, all this work has been in vitro,” Trotti stressed. “The question we haven’t answered is whether movement of DPRs is relevant for the disease process. This is the next thing on the agenda.” In future studies, the authors will look at whether the uptake of DPRs hastens cell death. The team is also exploring viral gene transfer of DPRs into focal points in the control mouse CNS in order to look at spreading through the CNS over time.

“ALS is a prototypical spreading disease,” commented Marc Diamond, of UT Southwestern Medical Center in Dallas, who was not involved in the study, “with pathology that has long been known to progress based on anatomical relationships.” And the current study does show that potentially pathogenic DPRs are capable from moving from one cell to another, but by itself, he said, that is not quite so remarkable, as it has been observed for multiple proteins independent of a disease-propagating process. “If a DPR goes into a cell, does it create more DPR pathology in that cell? That’s the question.”

Though inclusions of TDP-43 pathology seem to better correlate with neurodegeneration, evidence is accumulating that DPRs contribute to pathogenesis, added Tania Gendron, of Mayo Clinic in Jacksonville, Florida, who was not involved in the study. In fact, studies have shown that DPR pathology correlates with the neuropathological diagnosis of patients, she said.

The current study’s findings that DPRs are secreted from cells are quite interesting, she said, and may help explain an observation made in her lab, that DPRs can be found in cerebrospinal fluid. “Their presence there may be linked to an active process, rather than simply cell death.”