Characterizing and monitoring tumor genomes with blood samples could achieve significant improvements in precision medicine. As tumors shed parts of themselves into the circulation, analyses of circulating tumor cells, circulating tumor DNA, and tumor-derived exosomes, often referred to as “liquid biopsies”, may enable tumor genome characterization by minimally invasive means. Indeed, multiple studies have described how molecular information about parent tumors can be extracted from these components. Here, researchers from the University of Graz briefly summarize current technologies and then elaborate on emerging novel concepts that may further propel the field…

Summary of some emerging technologies in the liquid biopsy field 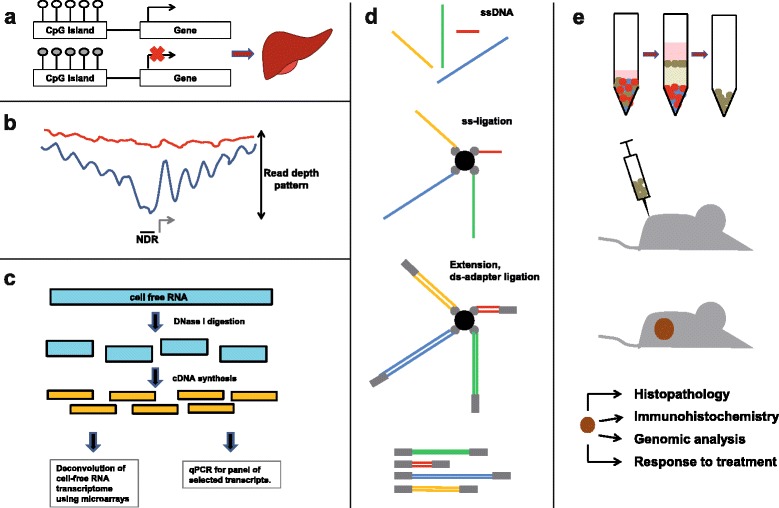 a Plasma DNA tissue mapping: Plasma DNA tissue mapping is an approach employing genome-wide bisulfite sequencing of plasma DNA and methylation deconvolution of the sequencing data to trace the tissue of origin of plasma DNA in a genome-wide manner (here shown exemplarily for liver-specific markers). The signal-to-noise ratio of such assays can be increased by the analysis of stretches of several CpG sites adjacent to the tissue-specific methylation marker. b Nucleosome mapping: analysis of the genomic sequencing coverage of plasma DNA fragments reveals the position of nucleosomes because plasma DNA is nucleosome-protected DNA. At transcription start sites (TSSs; indicated by a gray arrow), in particular at the nucleosome depleted region, the read depth is lower and has distinct coverage patterns around the TSSs of highly expressed genes (shown in blue), which differs from coverage patterns of unexpressed genes (red). c Plasma RNA-seq: After extraction of cell-free RNA from plasma and DNase I digestion, cDNA is synthesized and amplified from cell-free RNA. Deconvolution of the cell-free transcriptome using microarrays is conducted to determine the relative RNA contributions of certain tissues in a sample based on known tissue-specific expression profiles. In parallel, selected transcripts are quantified by qPCR. d Single-stranded DNA (ssDNA) library preparation: the scheme illustrates the key steps in the ssDNA ligation procedure. The ssDNA (top panel), which is not size-selected to avoid elimination of shorter fragments, is ligated to biotinylated probes (second panel), and after ligation of double stranded primers, extended to double-stranded DNA (third panel). DNA molecules of different lengths with a lower limit of efficient capture of approximately 40–60 bp can be obtained. e CTC-derived explants (CDXs): The patients’ blood is enriched for CTCs (green cells in top panel) and injected into one or both flanks in mice (second panel). The obtained CDXs (brown tumor in third panel) are then analyzed by histopathology, immunohistochemistry, and genomic analyses to confirm that characteristics of the original tumor were maintained. Mice bearing CDXs can be treated to evaluate response to various agents