Emerging Function and Clinical Values of Exosomal MicroRNAs in Cancer

Exosomes are a subset of membrane-bound extracellular vesicles with diameters ranging from 30 to 100 nm. Exosomes enclose a variety of molecules, such as lipids, proteins, and non-coding RNAs. In the past decades, microRNAs (miRNAs) have attracted great attention in cancer research, as they play an important role in the occurrence and development of cancer. Increasing evidence indicates that tumor cells communicate with not only other tumor cells but also cells present in the tumor microenvironment via secretion and transfer of exosomal miRNAs. More importantly, exosomal miRNAs are found to serve as signaling molecules to regulate tumor growth, angiogenesis, metastasis, sensitivity to chemotherapy, and immune evasion. Deregulated expression of exosomal miRNAs is an early event in carcinogenesis and may reflect the malignant characteristics of cancer. Owing to the wide existence and high stability of exosomal miRNAs in body fluids, they may represent a novel class of non-invasive biomarkers for cancer. Qingdao University researchers highlight the recent advances on the functional role of exosomal miRNAs in cancer pathogenesis. They also discuss the potential clinical utility of exosome-shuttled miRNAs as biomarkers for the diagnosis and treatment of cancer.

Summary of the Function of Exosomal miRNAs in Cancer 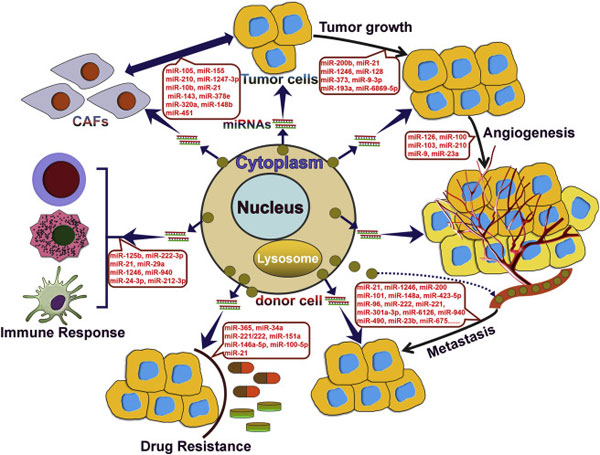