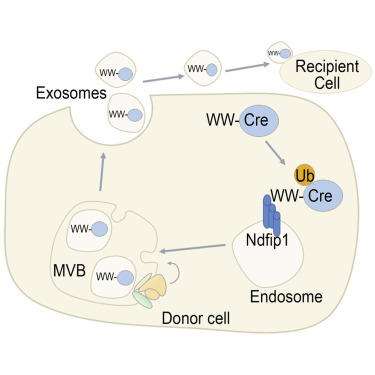 Exosomes represent an attractive vehicle for the delivery of biomolecules. However, mechanisms for loading functional molecules into exosomes are relatively unexplored. Here we report the use of the evolutionarily conserved late-domain (L-domain) pathway as a mechanism for loading exogenous proteins into exosomes.

University of Melbourne researchers  demonstrate that labeling of a target protein, Cre recombinase, with a WW tag leads to recognition by the L-domain-containing protein Ndfip1, resulting in ubiquitination and loading into exosomes. Their results show that Ndfip1 expression acts as a molecular switch for exosomal packaging of WW-Cre that can be suppressed using the exosome inhibitor GW4869. When taken up by floxed reporter cells, exosomes containing WW-Cre were capable of inducing DNA recombination, indicating functional delivery of the protein to recipient cells. Engineered exosomes were administered to the brain of transgenic reporter mice using the nasal route to test for intracellular protein delivery in vivo. This resulted in the transport of engineered exosomes predominantly to recipient neurons in a number of brain regions, including the olfactory bulb, cortex, striatum, hippocampus, and cerebellum. The ability to engineer exosomes to deliver biologically active proteins across the blood-brain barrier represents an important step for the development of therapeutics to treat brain diseases.