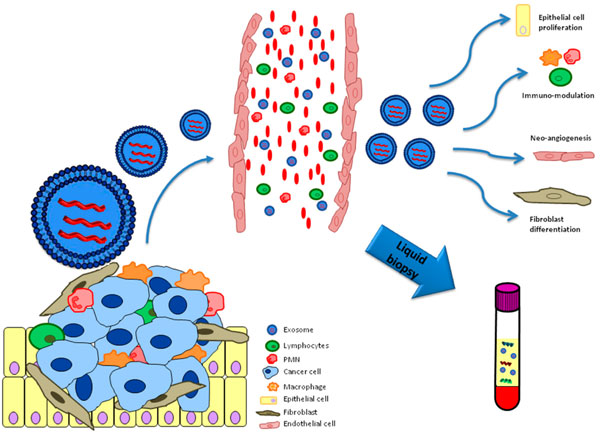 Lung cancer is the predominant cause of cancer-related deaths. The high mortality rates are mainly due to the lack of diagnosis before the cancer is at a late stage. Liquid biopsy is a promising technique that could allow early diagnosis of lung cancer and better treatment selection for patients. Cell-free microRNAs have been detected in biological fluids, such as serum and plasma, and are considered interesting biomarkers for lung cancer screening and detection. Exosomes are nanovesicles of 30-150 nm and can be released by different cell types within the tumor microenvironment. Their exosomal composition reflects that of their parental cells and could be potentially useful as a biomarker for lung cancer diagnosis. Researchers from the Fondazione IRCCS Istituto Nazionale dei Tumori summarize the state-of-the-art of circulating microRNAs (miRNAs) in lung cancer, focusing on their potential use in clinical practice. Moreover, they describe the importance of exosomal miRNA cargo in lung cancer detection and their potential role during lung carcinogenesis. Finally, the researchers discuss their experience with the analysis of circulating exosomal miRNAs in the bioMILD screening trial.