Exosomes have emerged as critical mediators of intercellular communication, both locally and systemically, by regulating a diverse range of biological processes between cells. Circular RNA (circRNA) is a novel member of endogenous noncoding RNAs with widespread distribution and diverse cellular functions. Recently, circular RNAs have been identified for their enrichment and stability in exosomes. In this review, researchers from the First Affiliated Hospital of Zhengzhou University outline the origin, biogenesis and function of exosomal circRNAs as well as their roles in various diseases. Although their precise roles and mechanisms of gene regulation remain largely elusive, exosomal circRNAs have potential applications as disease biomarkers and novel therapeutic targets.

The role of exosomal circRNAs in metastasis 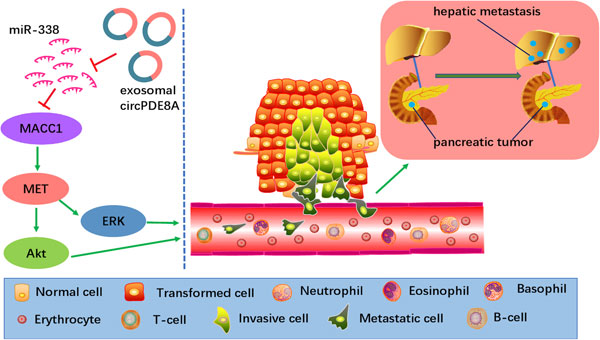 Exosomal circPDE8A acted as a competing endogenous RNA sponge with miR-338 and induced invasive growth via the MACC1, MET, ERK, and AKT pathways. Eventually, this process led to an increase in vascular endothelial permeability and promoted pancreatic tumor hepatic metastasis