Electronic cigarettes (e-cigs) vaping, cigarette smoke, and waterpipe tobacco smoking are associated with various cardiopulmonary diseases. microRNAs are present in higher concentration in exosomes that play an important role in various physiological and pathological functions. Researchers from the University of Rochester Medical Center hypothesized that the non-coding RNAs transcript may serve as susceptibility to disease biomarkers by smoking and vaping.

The researchers characterized plasma exosomes/EVs from cigarette smokers, waterpipe smokers and dual smokers (cigarette and waterpipe) for their size, morphology and TEM, Nanosight and immunoblot analysis. Exosomal RNA was used for small RNA library preparation and the library was quantified using the High Sensitivity DNA Analysis on the Agilent 2100 Bioanalyzer system and sequenced using the Illumina NextSeq 500 and were converted to fastq format for mapping genes.

Enrichment of various non-coding RNAs that include microRNAs, tRNAs, piRNAs, snoRNAs, snRNAs, Mt-tRNAs, and other biotypes are shown in exosomes. A comprehensive differential expression analysis of miRNAs, tRNAs and piRNAs showed significant changes across different pairwise comparisons. The seven microRNAs that were common and differentially expressed of when all the smoking and vaping groups were compared with non-smokers (NS) are hsa-let-7a-5p, hsa-miR-21-5p, hsa-miR-29b-3p, hsa-let-7f-5p, hsa-miR-143-3p, hsa-miR-30a-5p and hsa-let-7i-5p. Gene set enrichment analysis of microRNAs showed significant changes in the top six enriched functions that consisted of biological pathway, biological process, molecular function, cellular component, site of expression and transcription factor in all the groups. Further, the pairwise comparison of tRNAs and piRNA in all these groups revealed significant changes in their expressions. 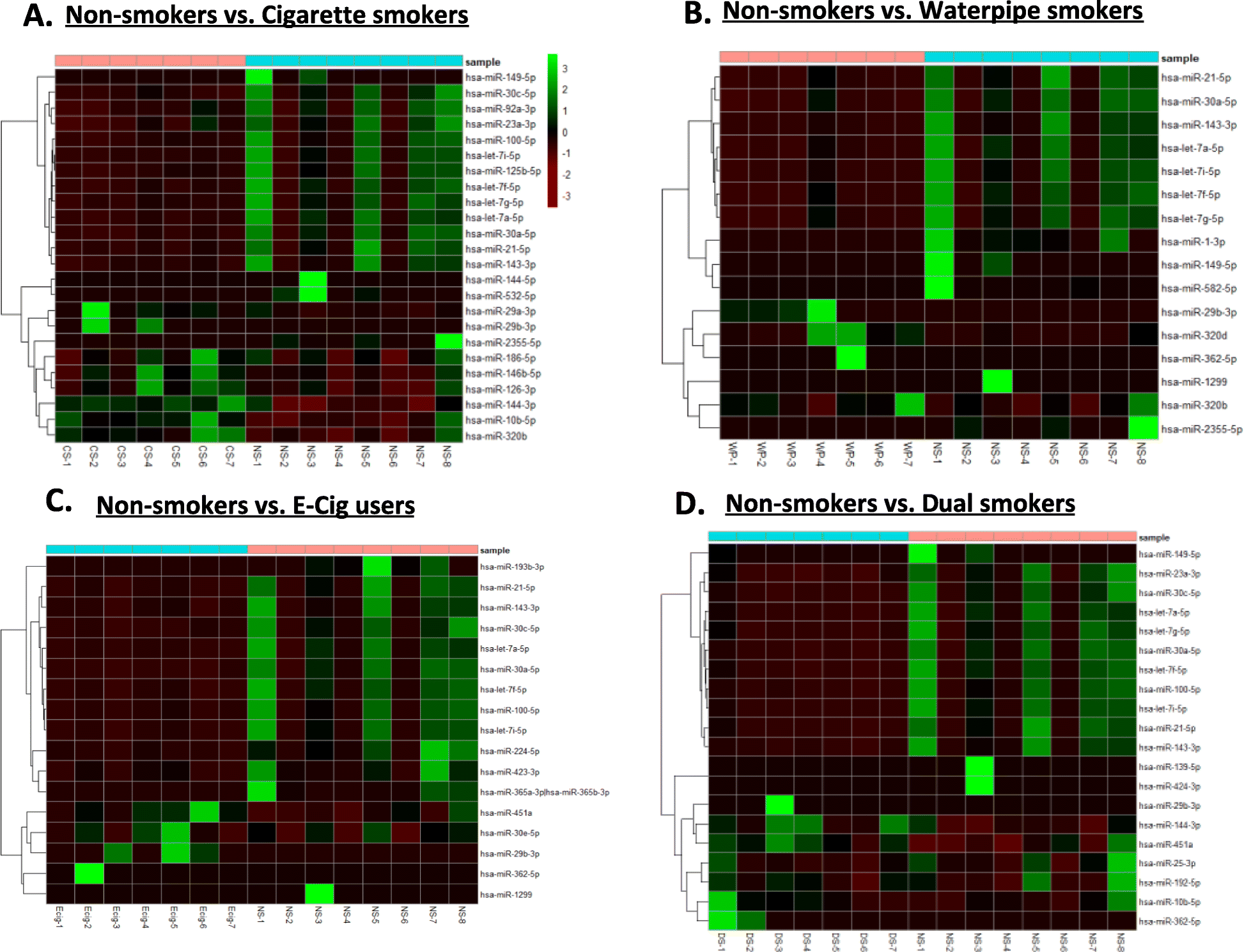 Plasma exosomes of cigarette smokers, waterpipe smokers, e-cig users and dual smokers have common differential expression of microRNAs which may serve to distinguish smoking and vaping subjects from NS. Among them has-let-7a-5p has high sensitivity and specificity to distinguish NS with the rest of the users, using ROC curve analysis. These findings will pave the way for the utilizing the potential of exosomes/miRNAs as a novel theranostic agents in lung injury and disease caused by tobacco smoking and vaping.