MicroRNAs (miRNAs) have generated great attention in oncology as they play a fundamental role in the regulation of gene expression and their aberrant expression is present in almost all types of tumors including pediatric ones. The discovery that miRNAs can be transported by exosomes, which are vesicles of 40-120 nm involved in cellular communication, that are produced by different cell types, and that are present in different biological fluids, has opened the possibility of using exosomal miRNAs as biomarkers. The possibility to diagnose and monitor the progression and response to drugs through molecules that can be easily isolated from biological fluids represents a particularly important aspect in the pediatric context where invasive techniques are often used. In recent years, the idea of liquid biopsy as well as studies on the possible role of exosomal miRNAs as biomarkers have developed greatly. Researchers at the Bambino Gesù Pediatric Hospital report an overview of all the evidences acquired in recent years on the identification of exosomal microRNAs with biomarker potential in pediatric cancers. They discuss the following herein: neuroblastoma, hepatoblastoma, sarcomas (osteosarcoma, Ewing’s sarcoma and rhabdoid tumors, and non-rhabdomyosarcoma soft tissue sarcoma), brain tumors, lymphomas, and leukemias.

Identification of exosomal miRNAs as biomarkers in pediatric cancer 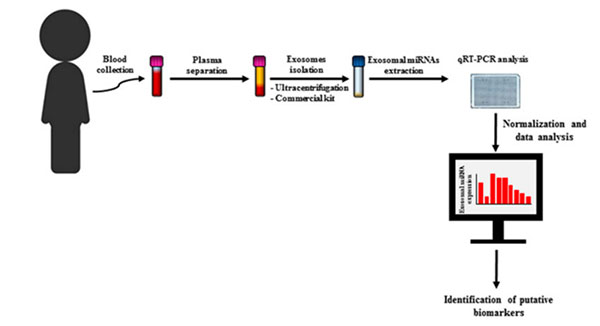 Exosomal miRNAs display different expression patterns between cancer patients and healthy children. Moreover, their expression changes during disease progression and after therapy and can therefore be promising biomarkers. With a simple venipuncture, the blood sample is collected and processed to separate the plasma or serum through serial centrifuges. Exosomes from serum or plasma are then isolated by ultracentrifugation or by using commercial kits. The exosomes pellet is lysate, and RNA is extracted. After retro-transcription, miRNA expression is assessed by real-time PCR and the data obtained is analyzed with specific software for identification of statistically deregulated miRNAs which may have a possible role as biomarkers.