Exosomes have recently appeared as a novel source of non-invasive cancer biomarkers since tumor-specific molecules can be found in exosomes isolated from biological fluids. Researchers from Oslo University Hospital have previously analyzed the proteome of urinary exosomes by mass spectrometry, and identified proteins differentially expressed in prostate cancer patients compared to healthy males. Since mass spectrometry is so far not commonly used in clinical laboratories, they have here investigated whether antibody-based methods such as Western blot or ELISA can be used to validate the use of the identified proteins as prostate cancer biomarkers. Western blot experiments designed to detect flotillin 2, TMEM256, Rab3B and LAMTOR1 showed that the level of these proteins was higher in urinary exosomes from prostate cancer patients compared to healthy males. Furthermore, a receiver operating characteristic curve of flotillin 2 in samples from 16 controls and 16 patients showed an area under the curve of 0.91, and 88% sensitivity at a threshold set to give 94% specificity. In addition, ELISA-based detection of flotillin 2 and PARK7 showed that the combination of these proteins was able to distinguish prostate cancer patients and healthy controls with 68% sensitivity and 93% specificity. Several promising biomarkers identified by mass spectrometry could not be evaluated by Western blot or ELISA due their low exosomal amount and/or lack of good antibodies. 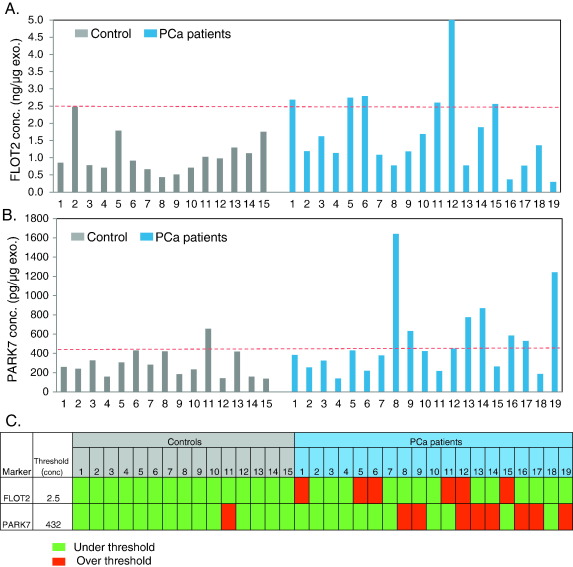 A. ELISA analysis of flotillin 2 concentrations in urinary exosomes. B. ELISA analysis of PARK7 concentrations in urinary exosomes. C. Heat maps of flotillin 2 and PARK7 signals at specific thresholds set to give in combination 68% sensitivity and 93% specificity (True positive patient: the levels of at least one of the proteins was over the threshold; True positive control: the levels of none of the proteins was over the threshold). The results are based on analysis of samples from 15 healthy controls and 19 prostate cancer patients. Exo: exosomes. FLOT: flotillin. PCa: prostate cancer. Conc: concentration.

These results show that several urinary exosomal proteins identified as prostate cancer biomarkers by mass spectrometry have a high diagnostic value also when analyzed by immunology-based methods, thus bringing these biomarkers closer to a potential clinical use.