Exosome-associated AAV vector as a robust and convenient neuroscience tool

Adeno-associated virus (AAV) vectors are showing promise in gene therapy trials and have proven to be extremely efficient biological tools in basic neuroscience research. One major limitation to their widespread use in the neuroscience laboratory is the cost, labor, skill, and time intense purification process of AAV.

A team led by researchers at Massachusetts General Hospital have recently shown that AAV can associate with exosomes (exo-AAV) when vector is isolated from conditioned media of producer cells, and the exo-AAV is more resistant to neutralizing anti-AAV antibodies compared to standard AAV. Here, the team demonstrates that simple pelleting of exo-AAV from media via ultracentrifugation, results in high-titer vector preparations capable of efficient transduction of central nervous system (CNS) cells after systemic injection in mice. They observed that exo-AAV is more efficient at gene delivery to the brain at low vector doses relative to conventional AAV, even when derived from a serotype that does not normally efficiently cross the blood brain barrier. Similar cell types were transduced by exo-AAV and conventionally purified vector. Importantly, no cellular toxicity was noted in exo-AAV transduced cells.

Neurons as preferentially targeted by peripherally administered AAV9 and exo-AAV9. 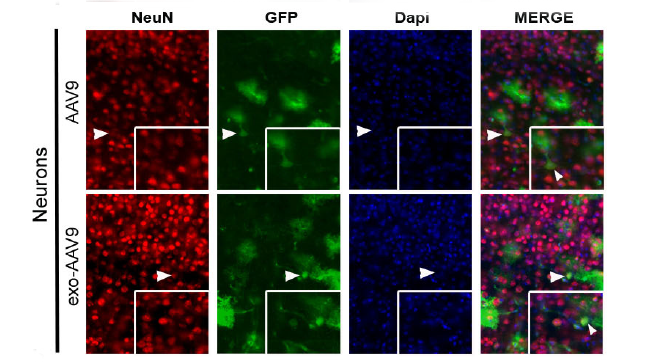 Double immunostainings were performed in order to determine the main neural cell types transduced by both exo-AAV9 and AAV9 (white arrows). (a) Representative images of neurons identified by the marker NeuN, in the cortex of injected mice. Neurons were predominantly transduced in the brain.

The researchers demonstrated the utility and robustness of exo-AAV-mediated gene delivery by detecting direct GFP fluorescence after systemic injection, allowing 3-dimensional reconstruction of transduced Purkinje cells in the cerebellum using ex-vivo serial 2-photon tomography. The ease of isolation combined with the high efficiency of transgene expression in the CNS, may enable widespread use of exo-AAV as a neuroscience research tool. Furthermore, the ability of exo-AAV to evade neutralizing antibodies while still transducing CNS after peripheral delivery is clinically relevant.