Exosome biogenesis and biological function in response to viral infections

Exosomes are extracellular vesicles that originate as intraluminal vesicles during the process of multivescular body formation. Exosomes mediate intercellular transfer of functional proteins, lipids, and RNAs. The investigation into the formation and role of exosomes in viral infections is still being elucidated. Exosomes and several viruses share similar structural and molecular characteristics.

It has been documented that viral hijacking exploits the exosomal pathway and mimics cellular protein trafficking. Exosomes released from virus-infected cells contain a variety of viral and host cellular factors that are able to modify recipient host cell responses. Recent studies have demonstrated that exosomes are crucial components in the pathogenesis of virus infection. Exosomes also allow the host to produce effective immunity against pathogens by activating antiviral mechanisms and transporting antiviral factors between adjacent cells.

Given the ever-growing roles and importance of exosomes in both host and pathogen response, researchers from Alabama State University address the impact role of exosome biogenesis and composition after DNA, RNA virus, on Retrovirus infections. They also address how exosomes can be used as therapeutic agents as well as a vaccine vehicles. 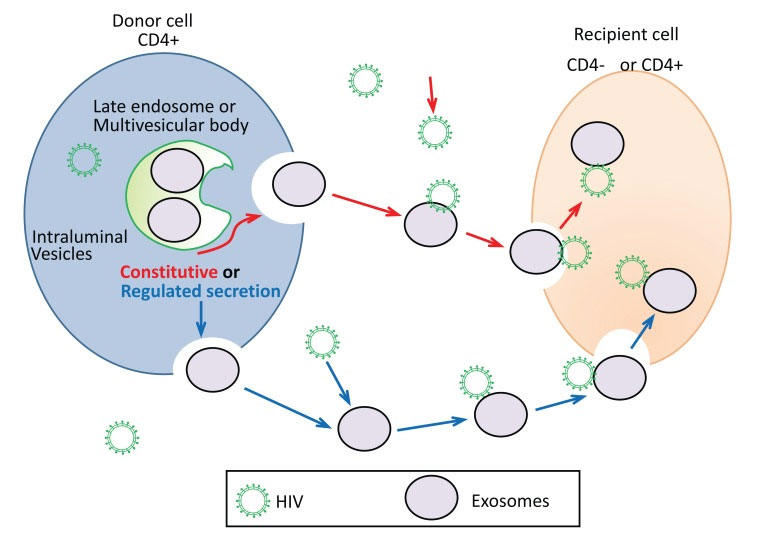 Exosomes can be secreted by means of a constitutive or regulated pathway. Exosomes can bind to HIV-1 via TIM-4, CD9, and/or CD81. This binding can facilitate exosome-mediated entry into CD4+ or CD4- cells. HIV-1 binds to exosomes released from the ‘donor’ cell and is shuttled to the ‘recipient’ cell.