Exosomes are extracellular vesicles released upon fusion of multivesicular bodies (MVBs) with the cellular plasma membrane. They originate as intraluminal vesicles (ILVs) during the process of MVB formation. Exosomes were shown to contain selectively sorted functional proteins, lipids, and RNAs, mediating cell-to-cell communications and hence playing a role in the physiology of the healthy and diseased organism. Challenges in the field include the identification of mechanisms sustaining packaging of membrane-bound and soluble material to these vesicles and the understanding of the underlying processes directing MVBs for degradation or fusion with the plasma membrane. The investigation into the formation and roles of exosomes in viral infection is in its early years. Although still controversial, exosomes can, in principle, incorporate any functional factor, provided they have an appropriate sorting signal, and thus are prone to viral exploitation.

This review initially focuses on the composition and biogenesis of exosomes. It then explores the regulatory mechanisms underlying their biogenesis. Exosomes are part of the endocytic system, which is tightly regulated and able to respond to several stimuli that lead to alterations in the composition of its sub-compartments. Many recent reports have ascribed functions to exosomes released from cells infected with a variety of animal viruses, including viral spread, host immunity, and manipulation of the microenvironment. Given the ever-growing roles and importance of exosomes in viral infections, understanding what regulates their composition and levels, and defining their functions will ultimately provide additional insights into the virulence and persistence of infections. 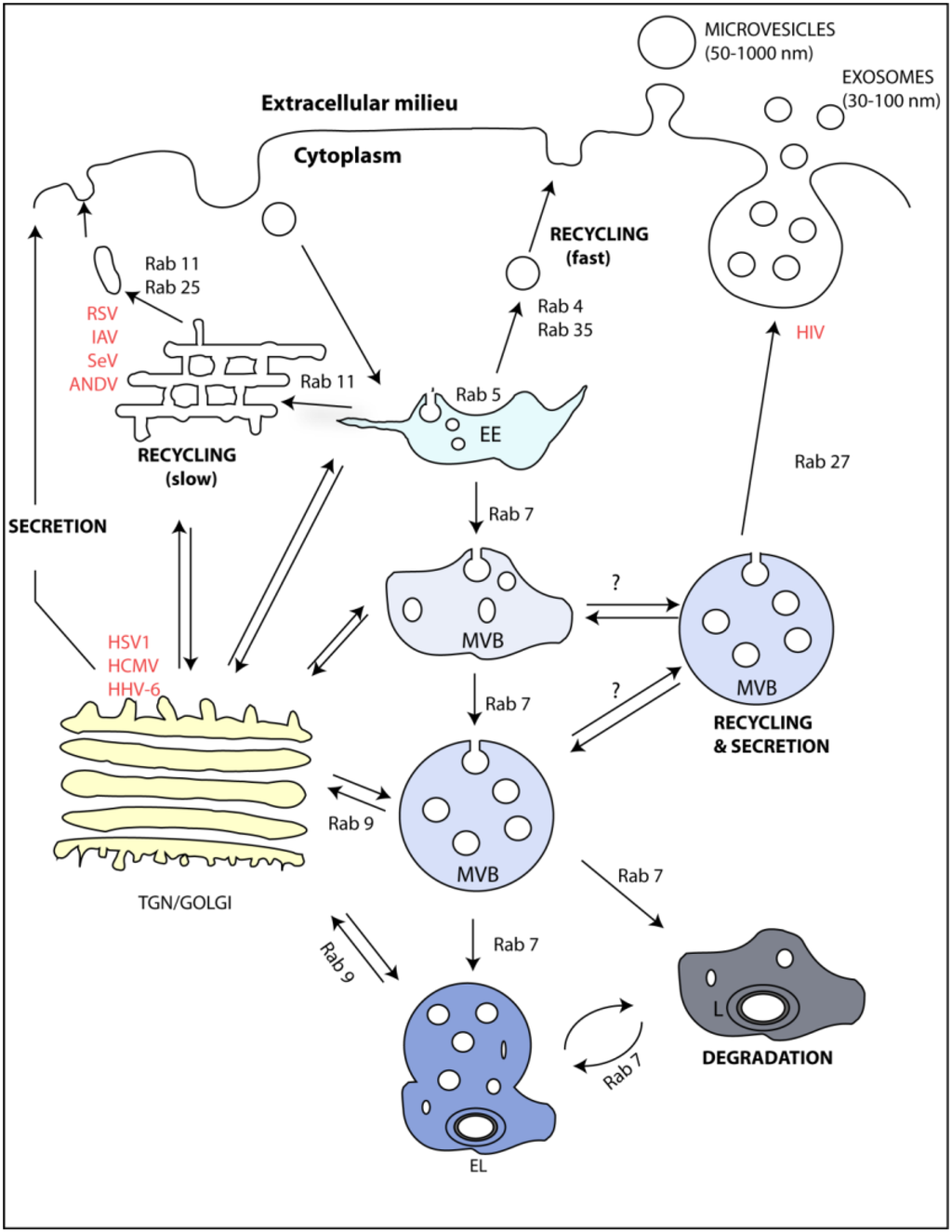 The endocytic and secretory pathways. Cargo binds to the plasma membrane, is endocytosed by a plethora of processes and, independently of the entry route, is transported to early endosomes (EE). From this sub-compartment, cargo is sorted to one of three destinations: recycling, degradation, or secretion. These routes require maturation of the EE into recycling endosomes or multivesicular bodies (MVBs), which can either fuse with lysosomes (L) to generate endolysosomes (EL) or with the plasma membrane to release intraluminal vesicles to the milieu as exosomes. The membranes of the sub-compartments of the endocytic pathway have different compositions. Specific members of the Rab GTPase family, for example, are differentially enriched in each sub-compartment: Rab5 is enriched in EE; Rab7 in MVBs; Rab11, Rab25, Rab4, and Rab35 in the slow and rapid recycling routes; and Rab27a/b in MVBs. Rab9 is present in vesicles destined for retrograde transport to the trans-Golgi network (TGN). In uninfected cells, interfering with these Rabs affects exosome release. Many viruses use these Rabs in diverse steps of the viral life cycle, although whether this usage impacts in exosomal release has not been investigated. For example, at late stages of infection, viruses such as IAV, RSV, Sendai virus (SeV), and Andes virus (ANDV) were shown to hijack Rab11 vesicles to transport their progeny RNA to the cell surface. HIV, HSV1, and human cytomegalovirus (HCMV) were shown to require Rab27a/b vesicles for assembly. Human herpes 6 (HHV-6) virions were shown to be secreted upon fusion of MVB with the plasma membrane, together with exosomes.