Spinal muscular atrophy (SMA) is caused by homozygous mutation of the survival motor neuron 1 (SMN1) gene. Disease severity inversely correlates to the amount of SMN protein produced from the homologous SMN2 gene. Researchers from the Ottawa Hospital Research Institute show that SMN protein is naturally released in exosomes from all cell types examined. Fibroblasts from patients or a mouse model of SMA released exosomes containing reduced levels of SMN protein relative to normal controls. Cells overexpressing SMN protein released exosomes with dramatically elevated levels of SMN protein. They observed enhanced quantities of exosomes in the medium from SMN-depleted cells, and in serum from a mouse model of SMA and a patient with Type 3 SMA, suggesting that SMN-depletion causes a deregulation of exosome release or uptake. The quantity of SMN protein contained in the serum-derived exosomes correlated with the genotype of the animal, with progressively less protein in carrier and affected animals compared to wildtype mice. SMN protein was easily detectable in exosomes isolated from human serum, with a reduction in the amount of SMN protein in exosomes from a patient with Type 3 SMA compared to a normal control. These results suggest that exosome-derived SMN protein may serve as an effective biomarker for SMA.

SMN protein is released from cells inside of extracellular vesicles 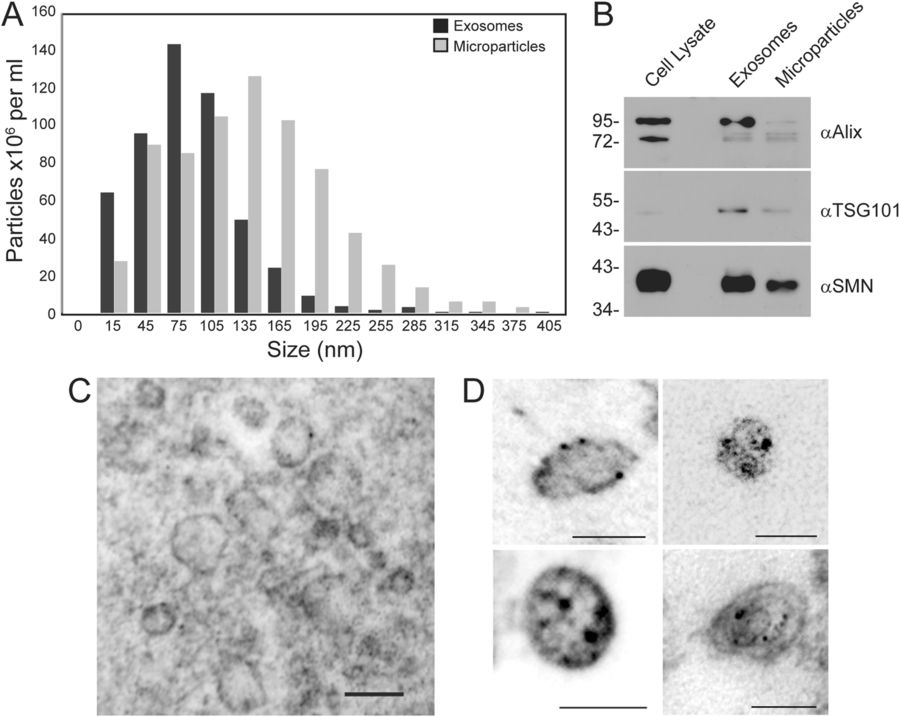