from Research Open by Phillip Askenase

Exosomes are newly recognized universal minute nanosize particles made by all cells in all species that transfer genetic instructions between cells. They additionally can be made immune specific by antibody coating to achieve dual specific antigen targeting of particular acceptor cells, as well as being vehicles to deliver genetic information as RNAs to alter targeted cell function. Because of exceptional resistance properties, some therapeutic exosomes can be administered orally. 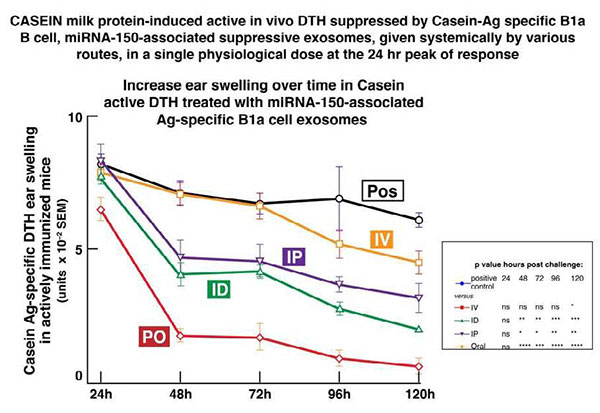 The figure shows experiments with milk protein (casein) allergy, expressed as swelling in the ear skin of mice following local injection. Systemic treatments with exosomes from suppressor T cells were begun at the 24 hour height of the positive ear swelling response (black line). These immune allergic tissue swelling responses and were strongly inhibited for the subsequent four days by administration of exosomes that were casein antigen-specific via surface antibody chains, and miRNA-150 transferring. They were adminisered by several routes, and were most strongly inhibitory when given orally (PO, red line), compared to the usually employed systemic routes of administration; such as intravenous (IV, orange line), or into the peritoneum (IP, purple line), or subcutaneous at a skin site distant from the ears (intradermal, ID, green line).