Exosomes are small vesicles which are produced by the cells and released into the surrounding space. They can transfer biomolecules into recipient cells. Researchers from the Blokhin Cancer Research Center set out to study the exosome involvement in the cell transfer of hormonal resistance. The experiments were performed on in vitro cultured estrogen-dependent MCF-7 breast cancer cells and MCF-7 sublines resistant to SERM tamoxifen and/or biguanide metformin, which exerts its anti-proliferative effect, at least in a part, via the suppression of estrogen machinery. The exosomes were purified by differential ultracentrifugation, cell response to tamoxifen was determined by MTT test, and the level and activity of signaling proteins were determined by Western blot and reporter analysis. The researchers found that the treatment of the parent MCF-7 cells with exosomes from the resistant cells within 14 days lead to the partial resistance of the MCF-7 cells to antiestrogen drugs. The primary resistant cells and the cells with the exosome-induced resistance were characterized with these common features: decrease in ER&alpha; activity and parallel activation of Akt and AP-1, NF-&kappa;B, and SNAIL1 transcriptional factors. In general, they evaluate the established results as the evidence of the possible exosome involvement in the transferring of the hormone/metformin resistance in breast cancer cells.

The characteristics of the resistant cell sublines 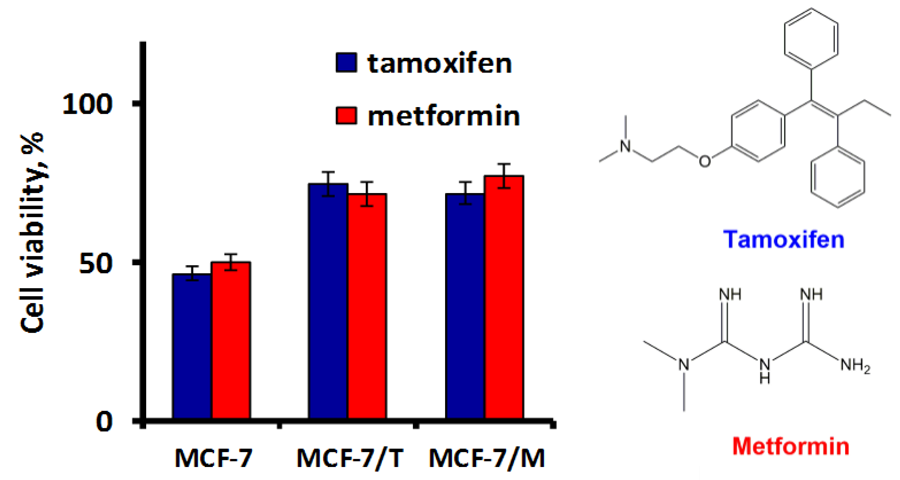 Cell sensitivity to tamoxifen and metformin. The cells were treated with 5 μM SERM tamoxifen or 10 mM biguanide metformin for 3 days and the amount of the viable cells was assessed by the MTT-test. Data represent mean value ± S.D. of three independent experiments. 100% was set as the viability of cells treated with vehicle control.