Tiny vesicles isolated from adult mesenchymal stem cells and administered intranasally can limit the damage to the brain of animal models caused by a seizure disorder called status epilepticus, according to research published this week in the Proceedings of the National Academy of Sciences (PNAS).

Status epilepticus is the formal name for a single seizure lasting longer than 30 minutes or a series of seizures in which the person doesn’t regain consciousness in between them. If it is not quickly stopped, even one episode can cause brain damage, loss of cognitive function and memory loss.

“Saving the brain from injury and disease is certainly one of the holy grails of medicine,” said Darwin J. Prockop, MD, PhD, the Stearman Chair in Genomic Medicine, professor at the Texas A&M College of Medicine and co-senior author of the article. “Our paper suggests one way that this might be done, and not by a procedure that requires brain surgery or even injection into a vein: All that would be required is a nasal spray that a patient might receive in a doctor’s office.”

The compound in the nasal spray is anti-inflammatory exosomes, or extracellular vesicles, which Prockop and his team isolated from cultures of mesenchymal stem cells, a type of adult stem cell. 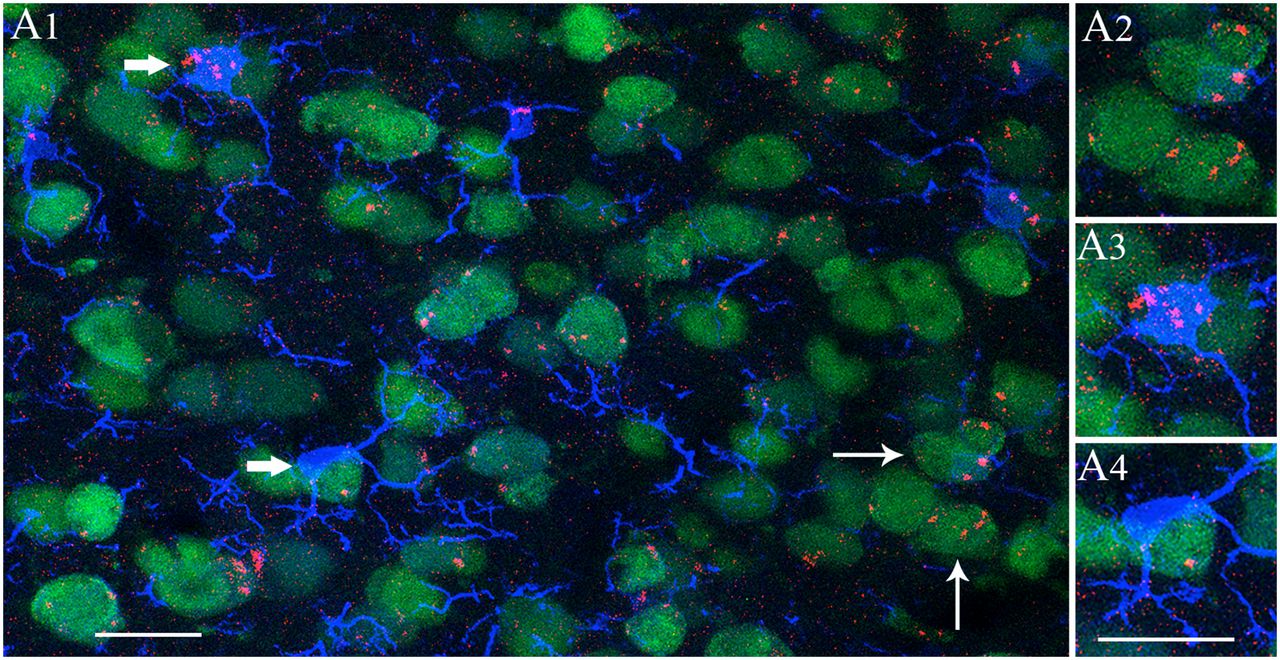 (A1) Distribution of A1-exosomes within NeuN-expressing neurons and IBA-1–positive microglia in the anterior-most part of the motor cortex at 6 h after IN administration. Note that A1-exosomes are seen in the cytoplasm of majority of neurons in this region even though the density of exosomes varied between neurons. (A2) Magnified view of neurons from A1 (thin arrows) displaying clumps of exosomes. A1-exosomes also incorporated into the cytoplasm of all microglia in this region (A1). (A3 and A4) Magnified views of microglia from A1 (thick arrows). One of these microglia displays clusters of exosomes in the soma (A3) whereas the other shows scattered exosomes in the soma and processes (A3). (Scale bars: 20 µm.)

Ashok K. Shetty, PhD, a professor at the Department of Molecular and Cellular Medicine at the Texas A&M College of Medicine, associate director of the Institute for Regenerative Medicine, research career scientist at the Olin E. Teague Veterans Medical Center and co-senior author of the paper, and his team tested the efficiency of these exosomes in a status epilepticus model with damage from a period of acute seizures. “What is remarkable is that the animal models were rescued from long-term effects of the seizure-induced brain injury by a nasal spray of exosomes,” Prockop said. It was able to ease inflammation of the neurons, prevent cognitive and memory dysfunction and stop abnormal neurogenesis in the hippocampus, a vital part of the brain responsible for memory.

“We gave the intranasal vesicle spray twice over 24 hours, the first one at two hours after the onset of a status epilepticus episode, and such treatment was effective at reducing multiple adverse effects on the hippocampus,” said Shetty. “In fact, the vesicles were able to move to the hippocampus in six hours, and their neuroprotection was enough to prevent loss of normal cognitive and memory function as well as abnormal neurogenesis, one of the substrates involved in formation of new memories.”

Drugs like benzodiazepines, which are tranquilizers, and hydantoins, a type of anticonvulsant, are used to stop status epilepticus episodes, but they are often unavailable—especially if the person hadn’t previously been diagnosed with epilepsy, which is the case 75 percent of the time—and they are ineffective perhaps as much as 30 percent of the time. “There really hasn’t been anything noninvasive like this to stop the cascade of inflammation and abnormal neuronal wiring or epileptogenesis that occurs after a status epilepticus event,” Shetty said. “These vesicles do seem able to protect the brain after seizures, stop neuroinflammation and prevent the development of chronic epilepsy that often results without this treatment.”

Although the findings are promising, the researchers urge caution before jumping to conclusions about a treatment for humans with seizures.

“Before this therapy can safely be tested in patients, we need to do great deal of further work,” said Prockop, who is also the director of the Texas A&M College of Medicine Institute for Regenerative Medicine. “But the inflammation in the brain caused by acute seizures is similar to the inflammation seen in the late stages of other brain diseases, including Alzheimer’s disease, parkinsonism, multiple sclerosis and traumatic injuries,” Shetty added. “Therefore, the promise of this new therapy is enormous.” 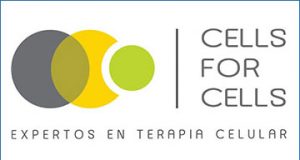